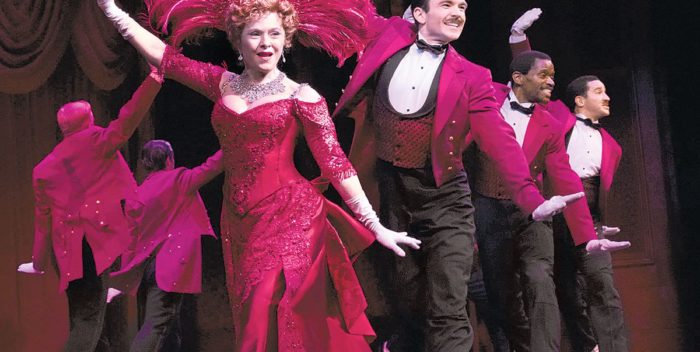 It’s too bad they don’t give Tony Awards to replacement actors. Bernadette Peters and Victor Garber, opening tonight officially in the post-Bette Midler “Hello, Dolly!” would win hands down. Now that Bette is gone, everyone in this show has relaxed. You can feel them all exhaling. It’s no long “Hello, Bette!” We’ve got a new ballgame at the Shubert Theater.

No one looked at ease on stage during Bette Midler’s gazillion dollar run as “Dolly!” It was a Bette Midler spectacular set against the backdrop of Jerry Herman and Michael Stewart’s famous musical. Bette’s voice was great and she was…a superstar who’d dropped into her one and only Broadway show. Her performance was an Event.

Now comes Bernadette Peters, whose voice is sublime and soaring. She has never so looked so much at home or so much like’s at ease on stage as Dolly Gallagher Levi. More accustomed to a narrative performance than Midler, Peters doesn’t draw attention to herself. But the show draws attention to her. She builds Dolly’s character. You really feel the loss of Ephraim Levi this time, and what Dolly has done to survive– and her decision to stop living hand to mouth by marrying the supremely grumpy, friendless half a millionaire, Horace vanderGelder.

Victor Garber steps into David Hyde Pierce’s shoes with authority as Horace. Garber is just physically bigger, and he and Peters have chemistry that Hyde Pierce and Midler did not share. Horace actually seems amused and enthralled by Dolly, not disgusted and put off. And now Dolly pays attention to Horace and his possibilities. In Midler’s version, you were afraid that Dolly was going to marry him and kick him out of his house. Peters and Garber really look like they’re having fun.

Kate Baldwin continues, magnificently, as milliner Irene Molloy. What a voice! I hope she never leaves. Gavin Creel is leaving soon as Cornelius Hackl, and he skipped last night’s show. He’s being replaced on March 13th by Santino Fontana. But last night we saw a spectacular understudy–Christian Dante White. I liked him so much I wish he was in there permanently. White has a beautiful voice, and his comic timing is infectious. He has a nice rapport with Baldwin and also with the new Barnaby, Charlie Stemp, who’s quite the elegant hoofer. The new Minnie Fay, Molly Griggs, is a lot of fun.

The songs in “Hello, Dolly!” just seemed more integrated, deeper, richer. Peters brings texture from her character to the whole situation, and you believe more in this little episode from the Harmonia Gardens (Luchows) on 14th Street to a Yonkers that couldn’t possibly have existed. Peters is also physically more adept as Dolly– she moves with the dancers and Gower Champion’s choreography so that it all flows.

I’m thrilled– I saw “Dolly!” several times as a young person with Ethel Merman, Pearl Bailey, and then Carol Channing’s return. This edition reminded of those versions, which was thrilling. I’ve written that Peter’s box office has taken a hit. But after seeing her, I hope that changes fast. If you’re a real Broadway fan, and not just here for the stunts, this is the real thing.