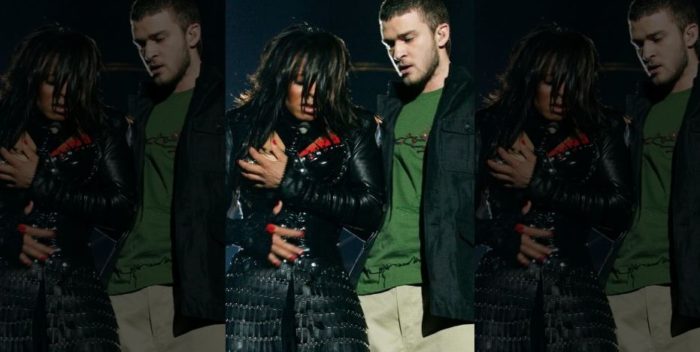 UPDATE: After I posted this story today, Janet Jackson posted a message clarifying she will NOT be at the Super Bowl.

EXCLUSIVE The interest is buzzing and hoping for an undo of the Janet Jackson-Justin Timberlake wardrobe malfunction tomorrow.

You remember the 2004 “Nipplegate” that became endless gossip for years. The rumor was that Janet was banned from the Super Bowl (false).

But I’m told that there will be no rematch during the Patriots-Eagles halftime show tomorrow. Janet Jackson, as far as anyone knows, is in Los Angeles and has no plans to travel to Minneapolis.

Indeed, a JJ appearance during Timberlake’s set would be so crazily diverting from the actual game that they’d have to stop play altogether.

No, it’s probably best to let the whole thing slide. Maybe Janet will turn up in a taped piece, but I doubt it. Better to let sleeping dogs lie.

Meantime, we’ll see if Timberlake– who has the number 1 album released on Friday– can top Lady Gaga’s sales tsunami from last year. Gaga’s Super Bowl appearance was so spectacular that her entire record catalog went soaring in sales immediately after. The show revived her “Joanne” album and its single “Million Reasons.” So hold on– we’ll see if “Can’t Stop the Feeling” comes roaring back onto the charts. Betcha it will.