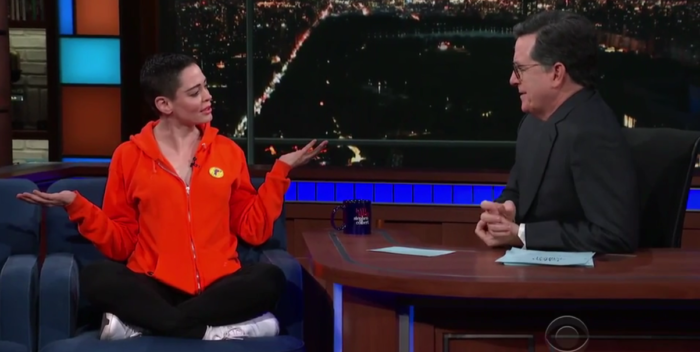 That’s it for Rose McGowan. She’s canceled public appearances for her book “Brave” after a verbal assault from a heckler at the Barnes & Noble in Union Square. McGowan is brave, she went into this as a warrior. But she’s also polarizing. Her talk show appearance should be preceded with a warning like BRACE YOURSELF. She reminds me of Courtney Love in the bad old days. “Brave,” meantime, isn’t selling like hot cakes, more like cold latkes. Her E! show “Citizen Rose,” scored fewer than 200,000 viewers on Sunday. Now she’s going to come off the road. And, of course, she and Ronan Farrow are teasing about another sexual abuser who’s “high powered.” Hey, if it ain’t broke don’t fix it. More and more this reminds me of the Ellen James Society from “The World According to Garp.”

I am canceling upcoming public appearances because I have given enough. I have given beauty, in return I was VERBALLY ASSAULTED for two full minutes @BNBuzz by an actor paid to verbally assault a woman who has been terrorized by your system. And no ONE in that room did anything

And everyone from my publicists, t assistants, managers and every person sitting in their chairs frozen by their weakness, a weakness called COMPLICITY. The truth is you all failed me. Again. And again. And again.

I would like an apology from the manager of the Union Square @BNUnionSquareNY and all security people, and the audience, who did nothing and let the paid verbal assault of an assaulted woman happen. Cool?