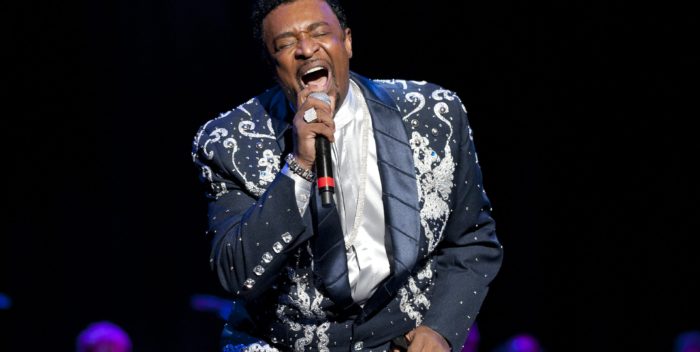 The great R&B singer Dennis Edwards has died at age 74, two days short of his 75th birthday. A deep baritone with glossy highs, Edwards was a leader of the Tempations circa 1969-70 and had a lot of hits with them including “Shakey Ground,” “Papa was a Rolling Stone,” “Cloud Nine,” “Ball of Confusion,” “Psychedelic Shack,” and “I Can’t Get Next to You.” Edwards replaced lead singer David Ruffin. His period guiding the Temps was a hugely important one.

Edwards left the Temptations and went out on his own with Motown in the mid 70s. He had a massive hit in 1984, “Don’t Look Any Further,” featuring Siedah Garrett, that is still played almost as much as his Temps hits.  Edwards was inducted with the Temps into the Rock and Roll Hall of Fame in 1988.

Almost two years ago, Dennis performed as a surprise for Aretha Franklin at her 74th birthday party in New York at the Ritz Carlton. He was one of  her favorite all time singers, and long time friend. Edwards leaves a daughter from a brief marriage to Ruth Pointer of the Pointer Sisters.

RIP a great singer and a great hit

Dennis sang lead on the Temps seminal hit “Shakey Ground” (see him at 00:43)

He also led them into this gigantic number 1 “Papa was A Rolling Stone.” Fans were used to the the original sound of the Temps driven a lot by Smokey Robinson songs (separate from the Miracles). Edwards commanded this funk driven era from producer Norman Whitfield. The Temps are over all the best R&B group in history simply because they had such huge range over a long span.