Everyone was there and everything happened.

Clive Davis truly outdid himself with his annual pre-Grammy dinner, in New York for the first time in 15 years, at the Sheraton ballroom with literally hundreds of stars in the audience, dozens on stage, and wild stuff going on all over the place.

First of all, Clive accidentally “outed” Jamie Foxx and Katie Holmes when he introduced them, then realizing it said: “If you’re going to sit together what better night than tonight.” Katie tried to hide, she’d come to the dinner with Tribeca Films’ Jane Rosenthal, it was all very funny. Katie, by the way, has a new short bob haircut, and is glowing, so Jamie’s doing something right. 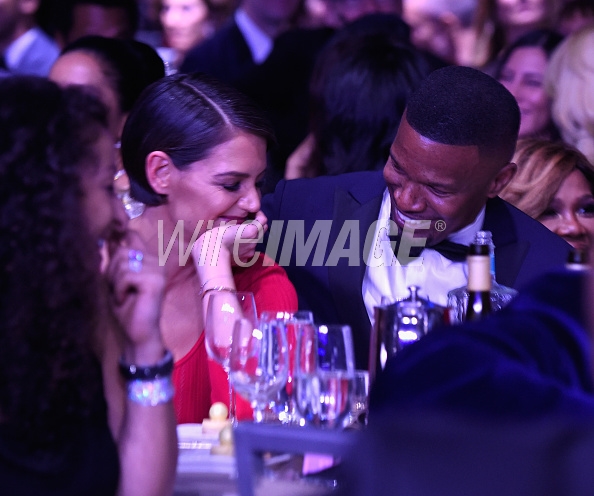 There were Broadway people everywhere, and some performed like Ben Platt and Leslie Odom, Jr. But also the Oscar-Tony-Grammy songwriting duo of Benj Pasek and Justin Paul, Billy Porter of “Kinky Boots,” and so on. Platt, star of “Dear Evan Hansen,” brought the very talented Beanie Feldstein, sister of Jonah Hill. Beanie just finished “Hello, Dolly!” on Broadway and is in “Lady Bird” about to take off like crazy.

Plus Songwriter Diane Warren, who just got her ninth Oscar nomination– for “Stand Up for Something”– was being congratulated by everyone!

How about Lorde with producer Jack Antonoff as her date! Cardi B, Peter Asher, John Oliver, Shaggy. Timbaland…

Katie Couric opened the night with a toast to Clive, calling him the “original American Idol.” Clive, wearing a custom made red velvet Armani jacket, took the stage and was on the money more than ever as he guided these 1,000 people through a magical mystery tour that began with Barry Manilow singing “This is My Town” and “New York, New York.”  Then came Luis Fonsi with the biggest hit of the year, “Despacito.” Migos followed, then Platt, and Odom, and a surprise sensational moment with another legend, Gladys Knight, singing “Stand By Me” and driving the place crazy with “Midnight Train to Georgia.”

Clive’s been doing this party in L.A. for 15 years so I’m, you know, jaded– I expect all this. The New York people who were seeing it for the first time, and looking around the ballroom at all the stars, were absolutely gobsmacked. They had no idea…

And then Alicia Keys took the stage as a tribute to Jay Z, who’d arrived with Beyonce, and was being awarded the NARAS Icon Award by Neil Portnow. Alicia– who debuted at Clive’s party in 2001 and went on to superstardom– created a medley of songs Jay Z has sampled or used in his rap albums over the years. It was genius, just brilliant, everything from “Hard Knock Life” from “Annie” to “Empire State of Mind.” Just, wow.

By then we’d seen Nancy Pelosi shimmying and just, like, everything. What do you do for an encore? Khalid came over from his Radio City show to sing “Young, Dumb, & Broke.” Then he and Logic performed their hit, “800.273.8255.” They are two young performers who will go the distance. Very very impressive.

And then we get Jennifer Hudson with the big finale– a medley of Aretha Franklin songs that sent everyone into the stratosphere– Sting couldn’t get over how great she was. Clive announced that JHud will indeed play Aretha in the Queen of Soul’s official movie (more about that soon). That was breaking news.

As Leslie Odom sang from Hamilton, we were lucky to be in the ‘room where it happens.’

And then, as JHud is winding down, who appears in the ballroom out of nowhere? Mariah Carey and her boyfriend. She had carefully missed seeing ex husband Tommy Mottola and his wife Thalia. Apropos of nothing, she said to me, “Roger Friedman, you’re always somewhere, but not with me.”

I should have replied, “What’s the frequency, Kenneth?” But I was trying to thank Neil Portnow for letting NARAS back yet another once in a lifetime adventure.

PS we’ll have some pic and video in the AM…