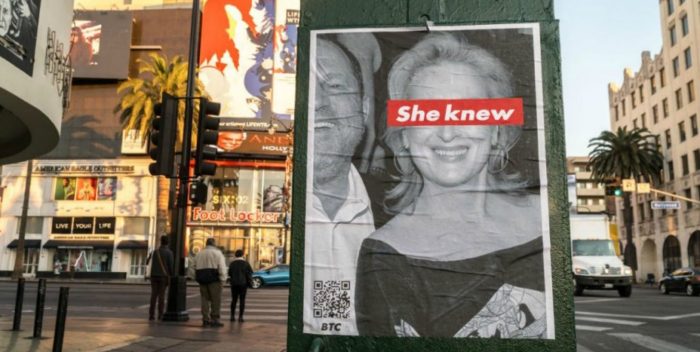 The lynch mob mentality has now turned against Meryl Streep. The Hollywood Reporter has this picture up, apparently someone’s making these posters that say “She knew.”

Uh, she knew nothing. Not only did she say so, but it’s true.

I wonder if this is Trump-related, since Meryl made her famous speech last year at the Golden Globes. Could Trump people be behind this? Oh yes, definitely.

Meryl Streep, like other actors, made movies at Miramax and The Weinstein Company. Like 90% of those actors, she knew nothing about what was going on. She went to the set, and made the films. She did the publicity. That’s it. I’ve no doubt if she’d known what had happened to Rose McGowan, Annabella Sciorra or anyone else, Streep would have spoken out and stopped making movies with Harvey Weinstein.

Rose McGowan has turned into a warrior, and a spokesperson, which is great. But with that comes a certain power and responsibility. Maybe it’s time to take a look at that, as well.