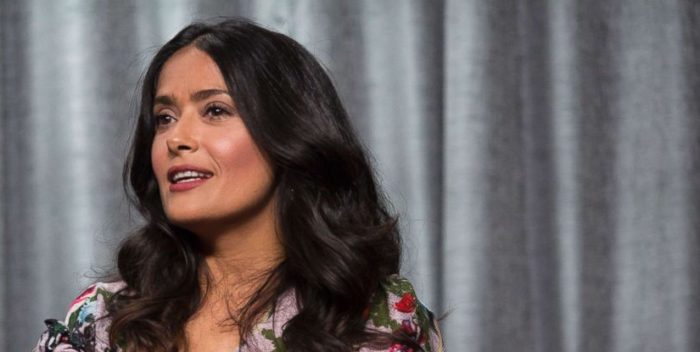 TAVIS SMILEY is gone from PBS. Whatever he did, it was bad, and now, like Charlie Rose, he is over at PBS. What did he do? Variety says Smiley was investigated and “The investigation found credible allegations that Smiley had engaged in sexual relationships with multiple subordinates, sources said. Some witnesses interviewed expressed concern that their employment status was linked to the status of a sexual relationship with Smiley. In general, witnesses described Smiley as creating a verbally abusive and threatening environment that went beyond what could be expected in a typical high-pressure work environment. Several expressed concerns about retaliation.”

So his next gig will be interviewing Charlie Rose and Matt Lauer.

SALMA HAYEK, an actress who is one of those really great people you meet in showbiz, wrote an Op Ed piece for the New York Times recalling Harvey Weinstein’s sexual, social and business misdeeds against her. This was all around the making of Julie Taymor’s movie “Frida,” which Hayek says Weinstein didn’t want to make with her. She says he took advantage of her, made her film a love scene naked with another woman, and so on. Hayek recalls an absolutely true story about a physical scuffle with Weinstein, Taymor, composer Elliot Goldenthal. She also says Weinstein threatened that he’d “kill her.” Weinstein issued a statement denying it all, as follows:

Mr. Weinstein regards Salma Hayek as a first-class actress and cast her in several of his movies, among them “Once Upon a Time in Mexico,” “Dogma,” and “Studio 54.” He was very proud of her Best Actress Academy Award nomination for “Frida” and continues to support her work.

While Jennifer Lopez was interested in playing Frida and at the time was a bigger star, Mr. Weinstein overruled other investors to back Salma as the lead. Miramax put up half of the money and all of the P&A; the budget was over 12 million.  As in most collaborative projects, there was creative friction on “Frida,” but it served to drive the project to perfection. The movie opened in multiple theaters and was supported by a huge advertising campaign and an enormous Academy Awards budget.

Mr. Weinstein does not recall pressuring Salma to do a gratuitous sex scene with a female costar and he was not there for the filming. However, that was part of the story, as Frida Kahlo was bisexual and the more significant sex scene in the movie was choreographed by Ms. Hayek with Geoffrey Rush. The original uni-brow used was an issue because it diverted attention from the performances. All of the sexual allegations as portrayed by Salma are not accurate and others who witnessed the events have a different account of what transpired.

Ed Norton, who was Ms. Hayek’s boyfriend at the time, [worked with Mr. Weinstein on the rewrite of the script in Mexico] did a brilliant job of rewriting the script and Mr. Weinstein battled the WGA to get him a credit on the film. His effort was unsuccessful to everyone’s disappointment.

By Mr. Weinstein’s own admission, his boorish behavior following a screening of “Frida” was prompted by his disappointment in the cut of the movie—and a reason he took a firm hand in the final edit, alongside the very skilled director Julie Taymor.

MORGAN SPURLOCK, director “Super Size Me” and lots of other documentaries, decided to come clean rather than wait for NY Times reporters with Tiki torches to come after him. He says he was once accused of rape, that he settled a sexual harassment case in his office with a woman he allegedly verbally abused, that he’s cheated on both of his wives and every woman he ever knew. I’ve known Morgan professionally for a long time but I didn’t know, as he writes in the blog post, that he’s “consistently been drinking since the age of 13? I haven’t been sober for more than a week in 30 years.” That is really awful, and I hope he can resolve that before things get worse. But it does explain why he was throwing up all those Big Macs in “Super Size Me.” I can’t imagine mixing alcohol with that crap.

The New York Times also has three women accusing Russell Simmons of rape, they’ve coined the term “the rape room” in their story about the Spotted Pig Restaurant, toppled the careers of chef Mario Batali and restaurant owner Ken Friedman (absolutely no relation). I’ve probably missed a few. And it’s only Thursday morning.

Also, Rose McGowan says Harvey Levin of TMZ is essentially blackmailing her. She wrote on Twitter last night: Help! I’m being harassed by @HarveyLevinTMZ He is hanging something over my head. He is on HW’s payroll. -Levin, you motherfucker, I’m trying to stop an international rapist. WTF have you done with your scumbag life? Back the fuck up.”