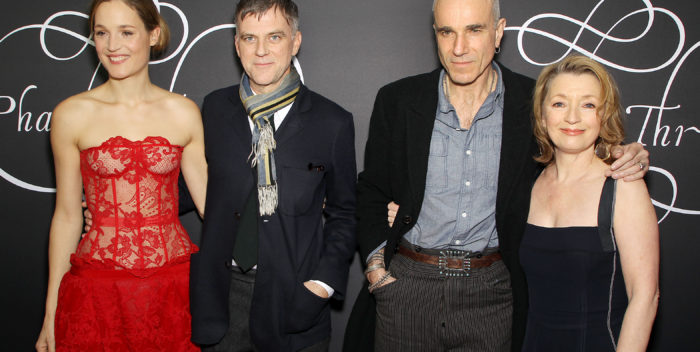 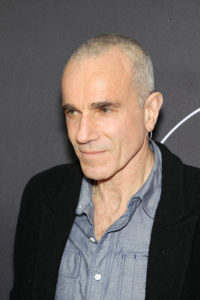 An A list crowd of swells came including Michael Shannon, Ben Foster, Dana Delany, Sienna Miller, Zosia Mamet, Paul Haggis, David Schwimmer,director JC Chandor,  even Little Steven van Zandt and his beautiful wife Maureen showed up. Gossip legend Cindy Adams got a special chair in the vestibule where she could depose all the famous people. Radio Man (still homeless, George Clooney) sat outside with his bicycle.

But where was the movie’s star, Daniel Day Lewis? He did take pictures outside in the enclosed heated tent where there was a red carpet and photographers. He took five, to be sure, one solo, one group, and three with members of the cast. And then? He left. Poof. Into the dark night.

Too bad. Upstairs at the Harold Pratt House things were convivial and cramped, a swell time in a well appointed richly paneled room. The women of “Phantom Thread” — Lesley Manville, Vicky Krieps, and Harriet Harris— more than made up for DDL’s absence. I asked each of them if they’d met Daniel Day Lewis while shooting– he stays in character, famously– and got varying answers. Manville, at least, knew DDL before hand. Harris, a surprise gem of the movie after a long theater and TV career, felt she’d actually met DDL and was delighted.

Oh well, I think the Focus people were a little disappointed DDL didn’t spend more time with us. But he’s retiring, I wanted to say! Never fear, the movie is top notch, our only real auteur-ific entry in the 2017 awards race, a piece of art. And what, I asked the astounding Manville, did she think had happened to the characters after the movie ended? She thought about it a second and answered, with aplomb: “They lived happily ever after, I suppose.”