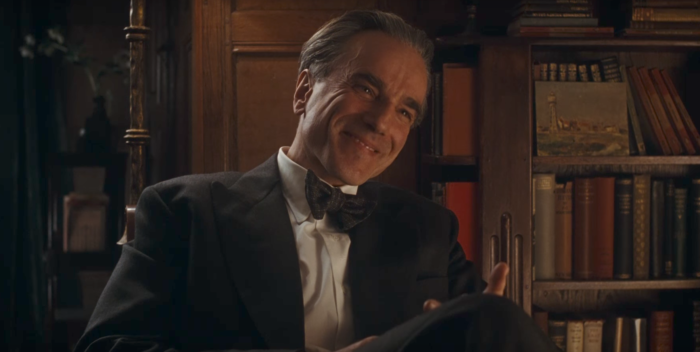 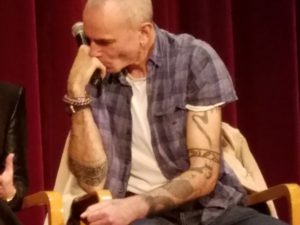 Daniel Day Lewis doesn’t do a lot of publicity. But the three time Oscar winner did turn up Sunday night for the Directors Guild screening of Paul Thomas Anderson’s “Phantom Thread,” a piece of exciting filmmaking that will figure greatly in the Oscar race.

Daniel looked happier than I’ve ever seen him in such a setting. He laughed and answered questions at the Q&A following the screening moderated by Lynn Hirschberg. He seemed very comfortable. The only thing different about him since we last saw him promoting “Lincoln” was…everything. He wore work boots, jeans, and a short sleeved flannel shirt that showed his arms are now covered in tattoos. Covered. His head is also shorn of hair, cut to the buzz. He’s not bald, but just the overall look– well, you’ll see the photos.

DDL says he’s retiring from acting with this film, but the look tonight made us think maybe he’s in the “Sons of Anarchy” feature film.

Joining DDL on stage were director PTA (“There Will Be Blood,” “The Master”) plus beloved veteran actress Lesley Manville and hot newcomer Vicky Krieps (pronounced crepes). The latter’s big revelation at Q&A’s is that– reading the script in her native Luxembourg–she thought the lines she’d been asked to put on tape were for a student movie. “I didn’t know until about three weeks in that Daniel was involved.”

DDL looked skeptical, but it doesn’t matter. Krieps is a find and may get herself a Best Actress nomination. For a newcomer, she is very self assured.

Also in the audience, the wonderful actress Harriett Harris, who you will know from “Frasier” as his literary agent. She nearly steals the movie as a pivotal secondary character.

Daniel plays a British fashion designer in the 1950s and much is made of the fashions and so on. But that’s 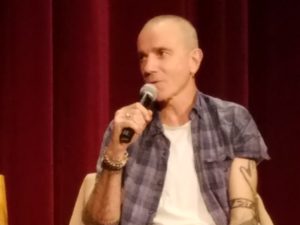 not really what the movie is about. His character, Reynolds Woodcock, is a genius, a prodigy, an arrogant bastard who is totally wrapped up in his own ego. He thinks he’s a loner but cannot be alone, which is displayed as the movie unfolds. The fashion part is almost beside the point.

As DDL said tonight, “During the early days we really didn’t quite understand what profession of Reynolds might be. It could have been anything in the creative world… The work itself is kind of immaterial.”

With the review embargo in place, I can’t tell you much more about the movie except that yes, there is a plot, there’s even a surprising plot twist. PTA has invoked Hitchcock, Shakespeare, Orson Welles and a few other elements of influence. The music is superb. There will be a lot of talk about this movie because, like a lot of DDL’s and PTA’s work, it’s a piece of art. DDL could indeed win a fourth Oscar, even with the tattoos (we don’t seem them in the movie).