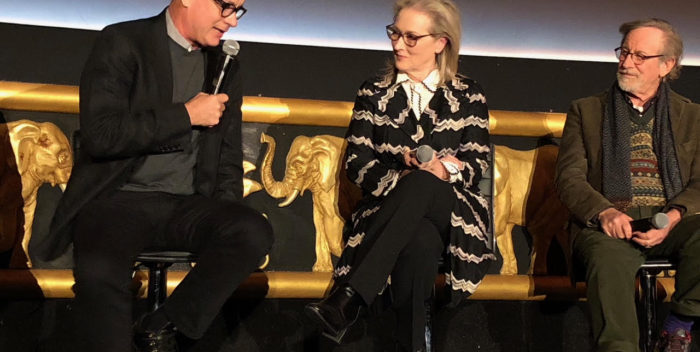 I can’t give you a review yet because of an embargo. But Steven Spielberg’s “The Post” has just screened in New York. It’s the first screening of the film about The Washington Post publishing the Pentagon Papers. Tom Hanks and Meryl Streep star in a movie so timely and patriotic that it’s sure to make its own headlines. The movie was made in just a few months which is extraordinary in itself.

“The Post” is dedicated to the memory of Nora Ephron, who was a friend of both Streep and Hanks. It’s one of many nice touches in the film and it comes at the end.

After the screening tonight, Spielberg, Hanks, Streep, as well as Matthew Rhys (plays Daniel Ellsberg, who leaked the Pentagon Papers) and Bob Odenkirk (as a Wash Post reporter Ben Bagdikian) turned up for a Q&A and a standing ovation. Also on stage was famed costume designer Ann Roth. I’m not supposed to say yet whether the movie or the actors or the costumes are any good, but I think you know I wouldn’t be writing all this if “The Post” had been a stinker.

Many people Tweeted from the Q&A moderated by journalist Mark Harris. You can look around and see what they had to say.

My one spoiler: Spielberg has made the prequel to “All the President’s Men.” It’s like his own “Rogue One.”  I kind of guessed it would end that way from the beginning, but it’s totally clever.