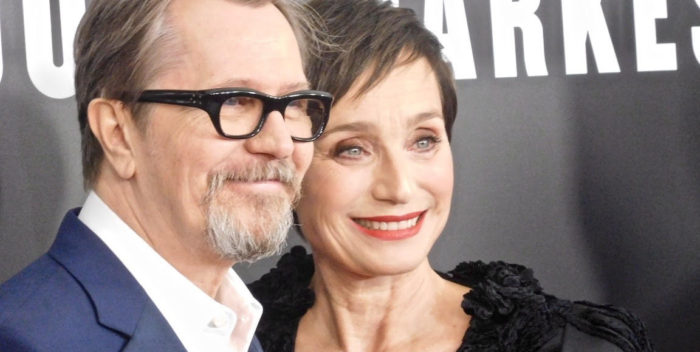 Presumptive Oscar nominee Gary Oldman’s least favorite scene in his new film, “The Darkest Hour,” involves his character, Winston Churchill, taking the tube (the subway) to Westminster and chatting up regular folk.  Although Churchill had a wonderful relationship with the British people, he never actually took that transport. Screenwriter Anthony McCarten’s challenge was conveying his rapport with the people so he came up with this scene.

At a Q&A this week, Oldman said, “How does one show that taking up the least amount of real estate? And that was a scene that Anthony came up with that takes four minutes and it does the job and tells the story I guess,” said Oldman, adding, “But from reading so much about him…I questioned the scene but people enjoy it…But no it didn’t happen.”

But mostly everything else in Joe Wright’s film did happen, and members of the Churchill family have given “The Darkest Hour” their stamp of approval. The famed statesman’s grand-daughter, Edwina Sandys, even came to the movie’s premiere on Wednesday night at the Paris Theater and the party following at the Plaza Hotel’s Oak Room.

What did you learn about yourself doing this role I asked Oldman on the red carpet?

“Stamina. I did 48 days straight consecutively in that makeup,” he told me. “My average day was 18 hours, so I’m driving the movie, and the stamina I had to do it… And I’m not a young man.”

Initially he was reluctant to even take on the role. “Well apart from the physical (challenges),” there were other roadblocks. “It was the work that was giving me pause. I knew it was going to be a year of my life to surrender to the man and I thought, ‘do I want to do that?’ Because I mean it’s a once in a lifetime opportunity for an actor but I had some apprehension.”

He said adding, “My wife – and it’s not clear if Oldman meant wife number four, Alex Endenborough, whom he divorced in 2015 or wife number five, Gisele Schmidt, who he married in September and was at the NY premiere – just said to me, ‘You know, c’mon, you’re going to stand here groaning, you’re going to speak this beautiful language and what’s the worse that could happen? You could be really terrible and suck but your life goes on,’ so that made sense to me. I’m not going to be marched in front of the firing squad. Just get some bad reviews and life goes on. So I jumped in.”

The fantastic prosthetic makeup and hair is by Kazuhiro Tsuji (Planet of the Apes, 2001), which is also sure to nab an Oscar nod. Oldman spent some 200 hours in the make up chair.

Did all this makeup make him more believable to himself as the character?

“What we do is we forget. You forget after a while,” said Oldman plaintively. “Occasionally I would walk down the hall and pass a mirror and then I looked in the mirror and thought, ‘okay,’ you get so used to it, you’re swept along as the character. That’s the great thing about it, it looks like a lot and it is, and it’s hot but you do forget. It’s not for a distraction. I would pinch myself sometimes, ‘Oh, it’s Winston Churchill!’”

Oldman was joined at the premiere by castmates Kristin Scott Thomas, who plays Clemmy Churchill, the PM’s wife) and Ben Mendelsohn, who takes on stuttering King George (who we all know so well from “The King’s Speech”). He is not related to the late great composer Felix Mendelssohn, we determined. “But I did like his father,” Ben said, referring to the 18th century philosopher Moses Mendelssohn, a person likely no one else in the room had ever heard of. Mendelsohn is the kind of actor you look forward to seeing in films, and he’s in a lot of them these days.  He’s like the new Alan Rickman, we said.

“I knew Alan,” Mendelsohn said, “and that’s a compliment.”