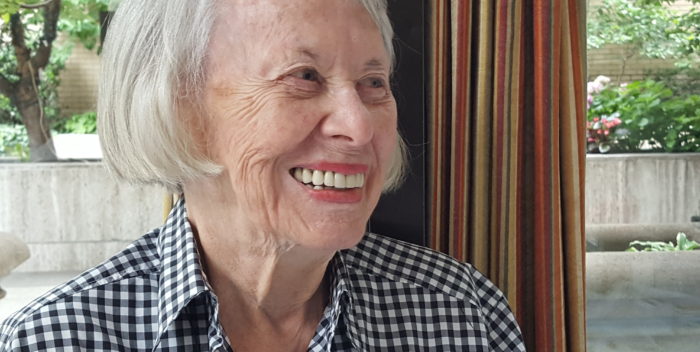 I almost don’t know what to say, but here goes: Mary Elizabeth Smith has died at 94. Liz Smith, the great gossip columnist and writer, my friend and in a sense mentor of any columns I’ve written since the 1980s, was a champion of literacy, a bon vivant, swell old Texas girl and a great person. Sure, there were people she crossed swords and paths with, but it didn’t matter. If you knew Liz, if she was your friend, she was loyal as the day was long.

When someone is 94 it should be enough. But you know, there have been so many phone calls and lunches over the years, so many margharitas and laughs — it’s never enough. COndolences to her family– the family she chose– Iris Love, Cynthia McFadden, Cynthia’s son Spencer who had such a loving relationship with her. Denis Ferrara, stalwart who has written her column for years with her input, Liz’s old assistant Mary Jo, as well as Diane Judge.

Liz was gay, she wrote about it in her memoir, Natural Blonde. But did you know she was married? Twice? The second husband, she told us once, just disappeared. “Honey he got on a train to Long Island and we never saw him again,” she said. She had to have him declared dead.

Liz bounced between the New York Daily News and the New York Post with her column over a 30 year run. She also wrote for New York Newsday, syndicated by the LA Times. She was the first gossip columnnist to get a million dollars a year. She deserved it.

In the early 80s, when I was a book publicist, I sneaked into her Daily News column through Harry Haun, who was filling in for her. Shortly thereafter Liz started taking my items. We got friendly even though her attack dog assistant of the time, Saint Clair Pugh, barely let me speak to her. I also became great friends with her item planter, Mike Hall, a legend who’d worked for Walter Winchell.

I’ll write more later. You know Liz coined the phrase, “Gossip is just news running ahead of itself in a red satin dress.” Donald Trump once tried to get her fired from the Daily News. It didn’t work. She’s had the last laugh on everyone. We stand, applauding.

Right now, please pour some whiskey, some Tequila, raise a glass to Liz. She was simply the best. There will never be anyone like her again.

Mary Elizabeth Smith was born on February 2, 1923 in Fort Worth, Texas. She often said that one of her greatest childhood pleasures was sneaking into a neighbor’s house while the other kids played outside to read the family’s New Yorker magazines.

She married her high school sweetheart, George Edward Beeman, a World War II bombardier in 1945; divorcing him two years later and enrolling in the University of Texas. After graduating, she boarded a train for New York City. Her dream was to write.

She came to New York with one suitcase, an infectious laugh, a big smile and an unbeatable work ethic. Liz also brought with her a degree in journalism and an ability to type 80 words a minute. She quickly got work as a typist and proofreader and soon became a producer for Mike Wallace who then was a reporter on CBS Radio. It was the beginning of a life-long friendship.

By the late 50s she began working as a ghostwriter of the popular “Cholly Knickerbocker” column. By the 60s she was off to “Cosmopolitan” magazine where she worked as the entertainment editor for Helen Gurley Brown launching another 50 year friendship. She simultaneously worked for “Sports Illustrated” and wrote the cover story for the first ever swim suit issue.

But it was her eponymous gossip column that brought her fame. First launched in February of 1976 in the New York Daily News. During the newspaper strike her editors asked her to appear daily on WNBC-TV’s Live at Five. She continued on Live at Five for the next eleven years. Smith was very proud of the local Emmy she won for her reporting in 1985.

Over the years she was honored with dozens of accolades. She was named a Living Landmark by the New York Landmarks Conservancy, won the Matrix Award for exceptional achievements in journalism and was named to “Vanity Fair’s” Hall of Fame. When she turned 90 she was photographed for the pages of “Vanity Fair” posing on a stallion in Times Square by Annie Leibovitz. Her old friend Nora Ephron wrote the accompanying tribute.

Over the years Smith became as famous as many of the people she wrote about and soon her column was syndicated in nearly seventy newspapers around the country. After her reporting on the divorce of Donald and Ivana Trump made front page news around the world she signed a deal with Newsday which made her the highest paid columnist in the country.

Smith often said of gossip that it was “news running ahead of itself in a red satin dress.” She was interested in far more than the pecedillaes of the rich and famous. She wrote about books, movies and the theatre with a depth of understanding and appreciation. Preferring to find the good, if she could, in the work of writers and actors. Her legions of friends and admirers grew.

By 2005 she had left “Newsday” for the “New York Post” where her column ran until 2009. The Liz Smith column was subsequently published online in the New York Social Diary where she shared her by-line with her long time collaborator and friend, Denis Ferrara until her death.

While she loved writing the column and became friends with many of the greatest stars of the era because of it, her passion became her work helping others. Forty years ago she was horrified to learn that 750,000 of her fellow New Yorkers couldn’t read or write at the 5th grade level and she vowed to do something about it. She used her considerable influence and her very large roledex (it was actually five roledexs!) to good use. Over the years she raised an astonishing $37 million dollars for Literacy Partners which enabled more than 27,000 adults to the wonders of reading. The “Lizzie Fund ” provides an endowment for the organization.

Anthony Tassi, the Executive Director of Literacy Partners said of her, ” To some, Liz is the most important gossip columnist of her generation. To thousands of disadvantaged New Yorkers, Liz Smith is the patron saint of a better life.”

Linda Buckley and Anita Hall worked with her on many of these efforts which she continued into her 90s. “She was a witty and charming host for many of them– loyalty reprising that role year after year. And if all that wasn’t enough, she raised awareness for countless good clauses by writing about them.”

They continued, ” She was always willing to write a note, make a phone call, take someone to lunch, attend a meeting or sign hundreds of letter to support the work she believed in so much. She was also quick to pick up the phone and tell you what you’d done wrong– she was usually right.”

Her many friends were constant recipients of clippings she carefully curated on which she scrawled messages on for their benefit, most often, “MUST READ.”
She wrote many books including “Dishing,” her humorous book about gossip and food (Fried Snickers, anyone?) and her autobiography, “Natural Blonde” was on the New York Times
best seller’s list for many months.

She summed up her philosophy of life this way, ” The greatest of all mistakes is to do nothing because you can only do a little. Do what you can.”

A memorial service will be held to honor her in the Spring. In lieu of flowers contributions may be sent in her memory to the “Lizzie Fund” at Literacy Partners 75 Maiden Lane, suite 1102 NY, NY 10038.