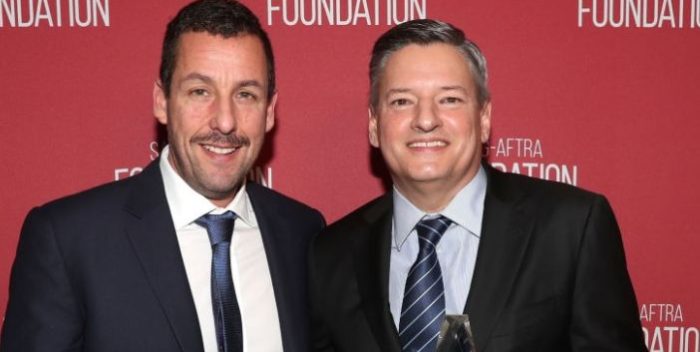 Guests included the lovely Kate Mara and her husband Jamie Bell, who is so terrific in “Film Stars Don’t Die in Liverpool,”  Rita Moreno and the talented Chris O’Dowd.  President of the SAG-AFTRA Foundation JoBeth Williams and Executive Director of the SAG-AFTRA Foundation Cyd Wilson started the night off.  “The Big Sick” cast came out to give Apatow, who produced the film, his honor.

Ray Romano ribbed Judd.  “I first met Judd when we worked on the HBO young comedian’s special in 1992.  The first time I saw him do stand up I thought to myself ‘this guy is going to be a great producer.’  It’s one thing to be a successful producer, but he’s one of the good guys. Every day when he was on the set he took us to lunch.  And he never let me pay for it, which I know he shouldn’t because he’s the producer, but I wanted to pay at least once, because, to be honest, award or no award, I have more money than him.  It isn’t right. You look at the great stuff he does and I just get residuals. It shouldn’t be this way.”

Kumail Nanjiani then recounted his pitch meeting with Judd.  “I first pitched Judd “Ghost witch,” now don’t judge it, a woman who is a witch who comes back as a ghost.  Judd quickly said do you have any other ideas?  So I told him that  when my wife and I were first dating she was in a coma for eight days and I hung out with her parents whom I didn’t know and he was like, ‘that’s the movie.”  Standing at the podium, Judd retorted back at Ray’s barb and said, “I was just on the site Celebrity Networth.  I’m worth more than you Ray.”

Apatow, long a champion of women’s rights,  said, “We all need to get together and really support all these people who are speaking up. We’re all aware now that there are really dark forces trying to keep people quiet.”

Oscar winner Kathryn Bigelow also spoke eloquently about entertainment fueling social change.  Another Oscar winner, Kate Winslet, got choked up talking about her quest to help those less fortunate. “The greatest privilege for me has been learning how to use my voice on behalf of others, and, for me, that is standing up for individuals who do not have the means to help themselves, whether they have autism and are non-verbal, whether they are homeless because of addiction, abuse or fear or helping a person who is dying because they haven’t the money to pay for the specialist treatment that could save their life.”

Adam Sandler was hilarious going on a rift about how he started Netflix and good naturedly ribbed his friend Netflix CEO Ted Sarandos. Adam said he met “while Ted was selling macramé at a flea market from his car.”  Kathy Bates presented the Actors Inspiration Award to her “Titanic” co-star Kate Winslet and noting the tragic scene where Rose and Jack are together for the last time before Jack drowns. Kathy quipped, “I personally think there was enough room in that lifeboat.”

Lionel Richie joked that all over the world fans tell him all the milestones that happen to his songs, including conceiving children. “As long as their last name is not Richie, I’m fine with it.” He continued with a hopeful message, “Take one step at a time and dream. If you don’t have dreams, you don’t have possibilities.”

Kristen Bell, Renee Olstead, Katherine McPhee and Sara Bareilles were among the performers with the standout being songwriter Diane Warren singing her “Stand Up For Something.”   The SAG-AFTRA Foundation’s Patron of the Artists Awards raised money for the nonprofit’s programs which provide aid to artists facing life-threatening illness or economic hardship, free educational resources and workshops for performers, and free children’s literacy programs worldwide. Since its inception, the Foundation has granted more than $19 million in financial and medical assistance and $8 million in scholarships to SAG-AFTRA artists and their dependents. Good for them. A unique night for a worthy cause.