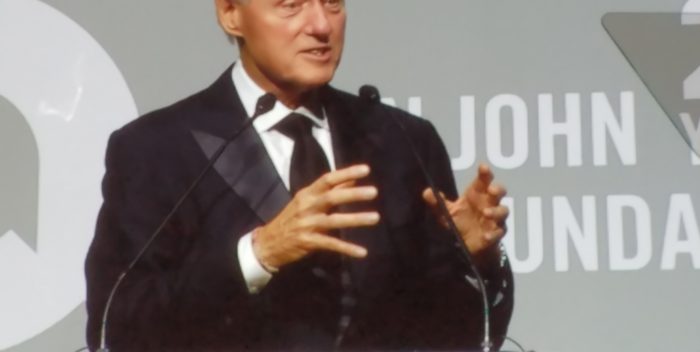 Bill Clinton is still a rock star. So it made sense that he was seated with fellow rock stars Elton John, Sting, and Billy Joel at last night’s Enduring Vision 25th anniversary of the Elton John AIDS Foundation dinner. Aretha Franklin dedicated a song to Clinton, and all the stars clamored to be around him.

Clinton, in a beautiful speech that used Elton’s “Candle in the Wind” as a metaphor, spoke about how the Clinton Foundation and EJAF work together because Elton’s group is so on point. (It’s quite different than amFAR.)

In fact in his own moving speech, Elton noted that 99% of the money that comes in goes right to programs for AIDS research and for AIDS patients. “We pay our own overhead,” he said.

I did ask Bill Clinton about the Donna Brazile controversy this week, in which she claimed that the DNC was rigged for Hillary Clinton’s nomination.

“She did it for book sales,” Clinton said of Brazile, “but you see she changed her story almost the next day. She backed off.”

I said to Clinton, “We don’t like it when they throw our friends under the bus.” And he replied, with that sugary Southern drawl: “No, we do not.”

During the evening, Alec Baldwin came on stage and did his Clinton imitation and his Donald Trump imitation, which, of course, got huge laughs. Later when Clinton took the stage he jokingly introduced himself as “William Jefferson Donald Clinton.”