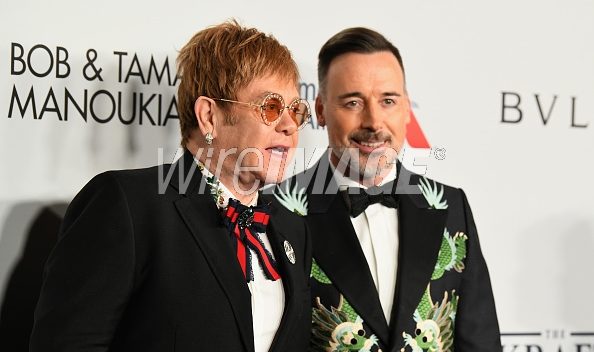 And it was quite a night, with moving speeches, a lovely performance by Heather Headley of Elton’s “Can You Feel the Love Tonight,” speeches by Clinton and New York Governor Andrew Cuomo, appearances by AIDS pioneers Aileen Getty (also once Liz Taylor’s daughter in law) and Jeanne White (mother of the late Ryan White), and a socko concert by (a thin but healthy) Aretha Franklin that blew everyone’s minds and had Elton and David watching from the lip of the stage in awe.

There were also dozens of celebrities. I will tell you that the main table consisted of Elton and David, Lynn Wyatt, Sting and Trudie Styler, Matt Lauer, Billy Joel and his wife Alexis, and Jeanne White.  And oh yes, Bill Clinton.

Clive Davis ran his own table with Denise Rich, Nikki Haskell, and friends.

Elsewhere in the room I ran into Ethan Hawke and Alessandro Nivola, who’d come as each other’s plus ones. They were like the Odd Couple and kept me laughing all night.

I was so happy to see Bernie Taupin, one of the greatest lyricists of all time.

Neil Patrick Harris was an excellent emcee, and he brought along his partner, David Burtka.. Alec Baldwin and wife Hilaria were there, as well double Tony winner Judith Light, Diane Lane. Billie Jean King, Susan Lucci, Donna Karan, Glenn Close, Andrew Rannells, John Waters, Sheryl Crow, Padma Lakshmi, designer Valentino, Broadway composer Alan Mencken, Grace Hightower DeNiro, Julie Taymor and Elliot Goldenthal, “Lion King” writer Irene Mecchi, and more and more and more. I mean, I had sort of step around New England Patriots owner Robert Kraft to talk to Clive Davis. It was a madhouse, but a fun one, and kind of crazy in the setting of the cathedral.

It was such an important night that Aretha added producer Narada Michael Walden to her orchestra.

Come back later this morning for video of Elton and of Aretha, who surprised everyone by sitting down at the piano and putting on an 8 minute version of “Bridge over Troubled Water” that people will be talking about for the rest of our lives.