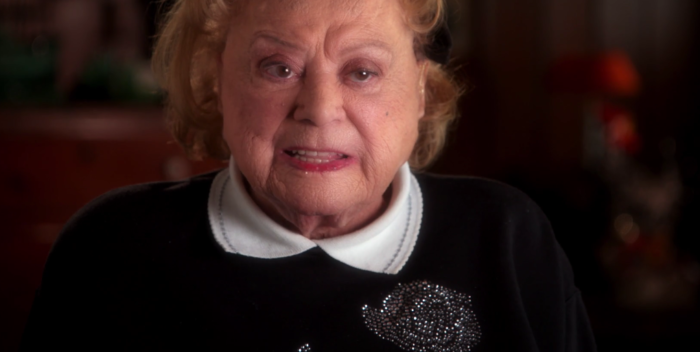 Think sexual harassment in Hollywood is a new thing? In an extraordinary new documentary that should absolutely be nominated for an Oscar, legendary comedienne  and singer Rose Marie tells how she was cut out of a 1954 movie because she wouldn’t accept a proposition from the producer.

You know Rosie Marie from “The Dick van Dyke Show” and “Hollywood Squares.” But the feisty 95 year old has been a star since she was FIVE years old. In “Wait for Your Laugh”– which opens around New York this weekend and is marvelously narrated by “Squares” host  89 year old Peter Marshall — we get the whole story and it’s a doozy. Beautiful, talented Rose Marie — Sally Rogers on “The Dick van Dyke Show”– was mobbed up like crazy. She came to us thanks to mobster Busgy Siegel!

But that’s another story. “Wait for Your Laugh” is very detailed about how Las Vegas started and who was behind it. Great stuff.

Around 1950, Rosie Marie co-starred with Phil Silvers on Broadway in a musical called “Top Banana.”The show was a hit, Silvers won a Tony Award, but Rosie Marie was disappointed the critics didn’t mention her.  She says one fan was Marlon Brando, who reassured her she was great. “Eff ’em,” he told the actress.

When the show closed, Silvers invited her to be in the movie of the musical. Rose Marie accepted. “It wasn’t very good, period.”

More importantly, during her interview with Wise on camera she says  that one of the producers of the film told her during production: “I could show you a few positions if you’re interested.”

The producer responded: “I’m not kidding, this could be your picture.”

“And in front of everybody I go, You couldn’t get it up if the flag went by,” Rose Marie shot back. She continues: “Which didn’t set too well with him. All my numbers were cut. There isn’t a single number with me in it.”

Rose Marie’s daughter observes: “I think after my mother’s experience with Top Banana, it pushed her away from doing movies.”

No kidding.  Kudos to filmmaker Jason Wise. Hollywood has always been the same.

More later on this terrific doc…