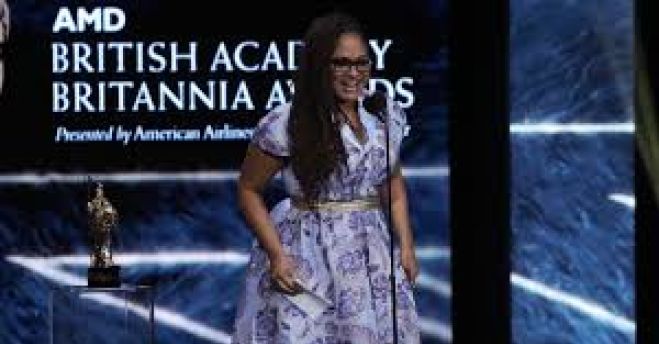 Oscar nominated director (Selma, 13) Ava DuVernay made clear her message to Hollywood Saturday night at the British Academy Britannia Awards at the Beverly Hilton. She spoke bluntly about what is currently going on about the abuse of power in Hollywood. This awards season will probably follow suit.

Funny Brit comedian Jack Whitehall started the night with a lighter touch.  He noted, “the Brits in this room love England so much that they moved here.”  He continued about his life in LA, “I always forget that sobriety is something to be proud of.  A friend told me that she thought I should go to a sober camp. I asked what that was.  She answered, ‘a place to go to work out your issues.  Oh yeah, I replied, we have that in England; it’s called a pub.” He went on to talk about honoree Claire Foy who plays Queen Elizabeth in Netflix’s mega hit “The Crown. “I’ve read that the Queen herself has actually seen “The Crown.”  What’s more amazing that that?  The Queen has a Netflix account. “

John Lithgow then presented his co-star Claire Foy with the British Artist of the Year. Claire quipped, “The problem is that I really am British, so I just want to say this is completely ridiculous and run off the stage. “  Kate Mara then presented her “Martian” co-star Matt Damon with the Stanley Kubrick Britannia Award for Excellence in Film.  Matt appeared on tape as he had to go back to Boston to tend to his gravely ill father.  Kevin Spacey took his turn giving the Brittania Award for Excellence in Television, presented by Swarovski, to his long time friendvDick Van Dyke.  “Dick can tell a story and make us laugh with no dialogue at all. The 158 episodes of ‘The Dick Van Dyke Show,’ will run forever,” Kevin noted.  Dick came up and immediately melted the crowd’s collective heart. Commenting on his most famous British accent, that of his character Bert the street sweeper in “Mary Poppins,” Dick offered a mea culpa. “After 60 years of bad jokes I am off the hook.  I am sorry for that excoriating Cockney accent. But you know at the time it as an all-British crew and they all said nothing.  I blame Julie Andrews as much as anyone.” He continued as the audience cracked up, “I had one hour with a voice coach at my house, and it was an Irishman named Pat Mahoney.” Director  “Baby Driver’s” Edgar Wright then gave the Charlie Chaplin Brittania Award for Excellence in Comedy to his longtime pal Aziz Ansari.  Aziz joked that being up after Dick Van Dyke was not easy. “Hey thank you Bafta for making me follow the most charming adorable shit I’ve ever seen.”

The most meaningful speech of the night though belonged to the next honoree, filmmaker Ava Duvernay, who received from Disney boss Alan Horn the John Schlesinger Britannia Award for Excellence in Directing.   She had much to say about the power that directors in Hollywood yield.“ I regard the bond between a director and an actor as sacred because if we do it right, we’re in a union, a creative marriage, creating life together.  So to imagine what’s been in the news this week, the harmful manipulation and harassment and emotional violence towards actors in my view is sinful. Sinful because I’ve held the innermost feelings of an actor in my hand. Actors give more of themselves than anyone else in the process of telling stories on film. So how dare someone enter into that sacred space with an aim to do harm? It’s an abuse of a very singular kind. It should be entirely unacceptable in our industry. I’ve said it before and I’ll say it again: We don’t have time to work on these dark behaviors, these ‘isms’ one by one…we should be outraged by all of it, all of the time. Until we are all safe, no one is safe.”

Kenneth Branagh then ended the night with his Albert R. Broccoli Britannia Award for Worldwide Contribution to Entertainment, which was given to him by his “Dunkirk” director Christopher Nolan. the ceremony was presented by American Airlines and Jaguar Land Rover.