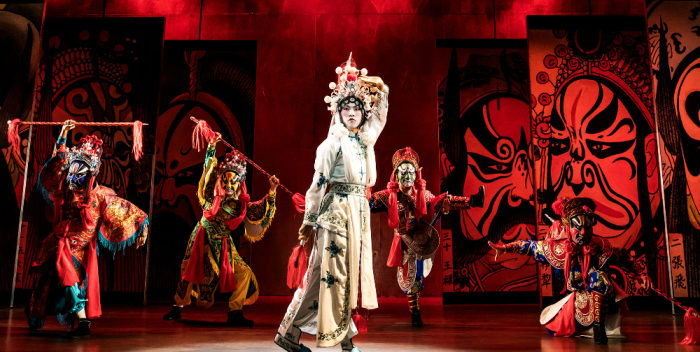 Clive Owen always seems like he should be James Bond, but he keeps playing these subtle and cool roles in things like “The Knick” and movies like “Trust” and “Shadow Dancer.” He’s ready for a superstar breakout role, and now it’s here. Owen really commands the stage in Julie Taymor’s new Broadway version of “M Butterfly,” which opened last night at the Cort Theater.

First of all, let me say that a Taymor collaboration with composer Elliot Goldenthal is always something to be excited about. Their “Midsummer Night’s Dream” in Brooklyn (and then filmed) a couple of years ago was a once in a lifetime experience. It was magical and astounding.

The pair has brought their great talents to David Hwang’s play, which has been updated to reflect what the world learned (a lot through Joyce Wadler’s exhaustively researched book) about the French diplomat in Vietnam who got everything political wrong and also didn’t know he was sleeping with a man posing as a woman. It’s a true story, and it’s as fascinating and as incendiary as it was in 1989 when John Lithgow and B.D. Wong created the roles.

Now newcomer Ji Ha (who came to the after party in a lovely, simple dress just to make the whole gender thing nuttier than ever) steps confidently into Wong’s high heels. Jin Ha and Owen each hold the audience in the palms of their hands. There’s also excellent supporting work from Enid Graham, Murray Bartlett, and Michael Countryman.

“M Butterfly” is a must see for the cast but always for Taymor and Goldenthal. What’s unique about this production: it’s very analogue. All of the gorgeous backdrop panels are guided by stagehands. There are no mechanics. Sometimes the panels waver, which is something I liked. After all the computerized movie pieces on Broadway, it’s kind of comforting to see an old fashioned set that springs to life on a human scale. Something about that gives “M Butterfly” the feeling that all of this really happened.