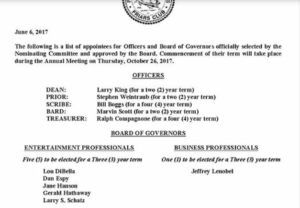 Exclusive The Friars Club– under investigation and on the heels of a settled sex harassment lawsuit–will induct new or old officers on Thursday night. Not being asked back as Scribe is Bruce Charet, subject of that very lawsuit. He’ll be replaced by Bill Boggs, whom everyone likes.

This doesn’t mean Charet won’t be around. “He just won’t have a title,” says a source.

Meantime, the Friars are having trouble with their roasts. They had wanted Harvey Weinstein all year but their own scandals had made Weinstein decline the invite. Now I’m hearing that since Weinstein will never be available, the Friars are going to have some kind of dinner honoring the late Jerry Lewis late next month. That should be a load of laughs.

Even more curious could be a winter-spring roast of KISS front man Gene Simmons. He’s at the low end of rock stardom. So hold on that news. Alan King must be turning in his grave.