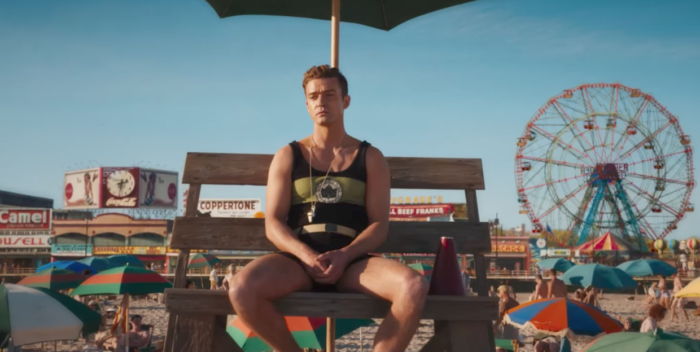 Justin Timberlake acquits himself as an actor in Woody Allen’s “Wonder Wheel,” a gorgeous looking drama that offers Kate Winslet in an Oscar buzzy performance, and Jim Belushi as a breakout possible Supporting Actor nominee.

“Wonder Wheel” doesn’t open until December 1st, but it won raves last night at the closing of the New York Film Festival. Allen and Winslet waved to the audience at Alice Tully Hall from a box high above, but declined to accept kudos at Tavern on the Green, where they were absent. But Timberlake and Belushi were happy to make the scene, as well as Tony Sirico and Steve Schirrippa, the two former Sopranos who make a cameo in the film.

Justin was accompanied by his beautiful wife, Jessica Biel, who just wrapped her USA TV series. They are happy as clams, and Jessica raved about their two and a half year old son, Silas.

But when I asked Justin what to expect at his Super Bowl performance come February, I was surprised by the answer. “There’s no announcement,” he said. (Funny– so much time had passed I thought this was all done. Last year the NFL announced Lady Gaga on September 29th.) He and manager Rick Yorn each shook their heads. “No, nope, no, the NFL is still having issues of course with kneeling,” Justin said. “There is nothing to announce.”

So, that’s a downer.

But “Wonder Wheel” — which I see is dividing press who saw it this week– I feel is a strong drama with moral twist that will surprise the audience. Winslet is extraordinary in her transition through the arc of the film. And her work in the third act will yield her many nominations and awards.