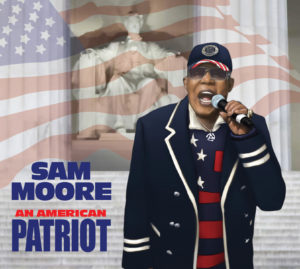 Happy Birthday, Sam Moore. The R&B great original Soul Man celebrates his 82nd birthday today with a new album and the same words as Steven Spielberg: “I am a patriot.”

Spielberg says exactly that in the comprehensive new documentary about him playing on HBO right now. “I love America,” the Oscar winner says. “I am a patriot.”

Moore’s new album, “Sam Moore: An American Patriot,” was recorded for the same reason. It’s not about partisanship or who the president is. It’s about supporting the country that made his work possible. On the new album, he’s created stunning covers of John Lennon’s “Imagine” and Marvin Gaye’s “What’s Going On.” There are new songs– “Peace Please” and “Show for You.”

There are also a clutch of great classics: Sam’s take on “The Star Spangled Banner,” “America the Beautiful,” “God Bless America” that are so moving they transcend the daily chaos we are living with. Moore’s sweet tenor is richer now than when he pumped out hit after hit in the 60s with songs like  “Soul Man,” “Hold On I’m Coming,” and “When Something is Wrong with My Baby.” His voice is more vibrant than ever, making the patriotic songs soar. (I hope Major League Baseball asks him to come sing for a post-season game. The crowd will go wild.)

Sam’s patriotism goes back to his early days attracting the attention of Sam Cooke and then Ahmet Ertegun as a young singer in Florida. When Sam and Dave Prater (deceased since 1988) joined together, they performed for Dr. Martin Luther King regularly at his rallies. After Dr. King was assassinated, Moore and Prater were one of the select acts chosen to sing at a memorial concert at Madison Square Garden in June 1968.

Since then, Moore has sung for all the living presidents. He performed for Clinton, Carter, Bush 41 and Bush 43 at the Kennedy Center, and for all of them individually (Obama four times). On October 21st, he’s been invited by all of them and Obama to sing at the Texas Hurricane Relief concert at Texas A&M along with Alabama and the Gatlin Brothers, among others. It’s an honor that cuts both ways.