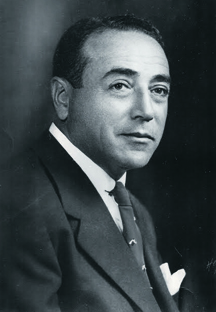 Reginald Hudlin’s “Marshall” — which opens on Friday — is a valiant attempt at a worthy cause– to celebrate the early achievements of Thurgood Marshall decades before he took his seat on the US Supreme Court. But the movie rewrites history—or creates a history that never happened—to achieve its goals. A great deal of “Marshall” is invented or manufactured for dramatic purpose. It is filled with inaccuracies and fake characterizations, most particularly of my late, great uncle Sam Friedman, my grandfather’s older brother who died in 1994 at the age of 90.

This doesn’t take away from Thurgood Marshall’s many considerable successes. But if you’re going to see “Marshall,” a few real facts—not fake ones—should be known.

A quick recap: in December 1940, Joseph Spell, a black chauffeur, was accused of raping Eleanor Strubing, the society wife of his employer, in tony Greenwich, Connecticut. No lawyer would take Spell’s defense. The case was offered to Sam Friedman, a respected lawyer from Bridgeport, who accepted. The NAACP sent their young senior counsel, Thurgood Marshall, to Bridgeport to assist Sam. Marshall did not try the case. He was sent as a consultant.

My great uncle (and believe me, he was indeed great) has been depicted in “Marshall” and in press materials as a novice to trial law, insecure without the presence of Thurgood Marshall. In the movie Sam is seen as a person of no backbone who feared for his life and that his reputation would be ruined if he lost the case. This is laughable. In reality, he’d been practicing law for 14 years, had a sterling reputation as a trial attorney, and was certainly not the flustered novice described in reviews and publicity materials. I have no doubt Sam knew he would win the case once the trial began.

Almost not a word of my great uncle’s depiction in the movie is accurate. The story of the trial, and how Sam Friedman successfully defended Joseph Spell while Thurgood Marshall took notes as second chair, was well documented: In January 1941, the Bridgeport Post covered the trial with daily front page stories. (They are all on microfiche at the local library.) Marshall is barely mentioned. It’s Sam’s masterful questioning of the witnesses that is regularly cited. The trial was also more recently written about in a 2005 article by Daniel Sharfstein in Legal Affairs. https://www.legalaffairs.org/issues/March-April-2005/feature_sharfstein_marapr05.msp

My great uncle was actually a whiz kid. You wouldn’t know it from “Marshall,” but Sam Friedman graduated from Boston University Law School—where he’d been fast tracked—in 1925. He passed the Connecticut State Bar in 1926 and set up his own office in his hometown of Bridgeport. From the beginning he handled all kinds of cases—not just insurance fraud, as the PR for “Marshall” would indicate. He was subsequently joined in his practice by his brother Irwin. Two years later, in 1943, Sam would become the town prosecutor in neighboring Fairfield. Four years later he was made a judge there. Irwin became a judge in a nearby town in 1951.

From the start of the film, the scales are tipped against my kind, soft spoken uncle as he is sarcastically told by Marshall to carry his suitcase full of books—as if books were something foreign to Sam. Later Josh Gad (talented but miscast) squeals to Marshall (Chadwick Boseman, also miscast) that he can’t afford to lose the Spell case. Marshall responds with “Fuck you, Sam Friedman,” not once but twice. This is absurd and never happened. It’s inconceivable that Marshall, who was erudite, would have addressed my uncle in such a way. (My family cringed when they heard this at a private screening this summer.)

A lot of other things are faked in “Marshall.” My uncle was never beaten up by anyone, especially racist thugs. He was also not accosted by friends in their local synagogue who wondered “what would your parents think?” (In fact, Sam’s parents—my great grandparents—lived right there in Bridgeport along with a huge and supportive family. To suggest anything else is simply fiction.) He didn’t rely on Thurgood Marshall to tell him how to conduct the case. He certainly didn’t panic when Marshall was absent from the courtroom. He was happy to have him there, but Marshall was not the architect of the defense. What also isn’t shown: when Marshall wasn’t allowed to eat lunch in the local hotel restaurant, it was Sam who hosted him without fail.

So what now? I’ve written about and reviewed movies for over 25 years. There have been countless instances of history being twisted to make movies seem more interesting. Did I think it would happen in my own family? Never. Now I know what it’s like and it isn’t so much fun. My great uncle, who was my father’s mentor and the leader of our family, has been sold out. He suffers, Joseph Spell suffers, and so does Thurgood Marshall in the process.