The revelations about Harvey Weinstein– horrible but nothing on the scale of Donald Trump or Bill Cosby– have caused mayhem on Twitter and elsewhere for show biz types. Mudslinging and hypocrisy are out of control.

Hypocrisy: Sharon Waxman of “The Wrap,” who’s never had an original thought in her head, said she “had” the story in 2004 at the New York Times. She says the Times killed it. Unfortunately, Waxman’s former editor, the highly respected Jonathan Landman, says that is simply not true.

The Times, which broke the story of Weinstein’s sexual misconduct, addressed the whole issue of Waxman today themselves.

Waxman ran afoul of Weinstein back in 2004 on another issue. I wrote about here. She interviewed him for a story on Quentin Tarantino that was supposed to be in a collection about directors. Instead, she used the quote in a Times story about Disney’s relationship with Miramax. That was a no-no.

Waxman, by the way, if she did have the goods on Weinstein as a predator, didn’t mind taking Harvey’s money for ads for The Wrap, noshing on his hors d’ouevres at parties, or doing business in general with him. Here’s a nice picture of Weinstein Company CEO David Glasser with Waxman at an event: 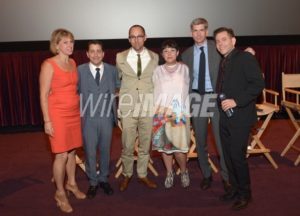 More hypocrisy: Someone has to give Mika Brzezinski a shot of reality. She’s made the whole story about herself. All weekend she kept tweeting that she had a three book deal with Weinstein Books but she couldn’t go through with it unless Harvey was fired. Really, Mika? No one wanted those books. Harvey took them because you were a TV news anchor. No one cares. And no one cared: those books were already published by Weinstein and/or Hachette over the last few years. They sit at the bottom of amazon’s inventory.