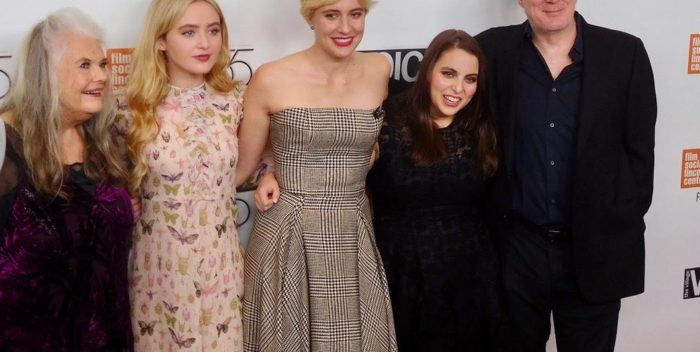 Looking Grace Kelly elegant in a strapless Ralph Lauren gown, on the red carpet actress now director Greta Gerwig made time to speak to everyone at the Saturday night premiere of her film “Lady Bird.” Also attending from the film, Beanie Feldstein, Kathryn Newton, Tracy Letts and Lois Smith attended. (Sadly not at the screening were cast members Saoirse Ronan, Laurie Metcalf, Lucas Hedges and Timothée Chalamet.)
Set in 2002 Sacramento, Ronan plays an angst-riddled Catholic high school senior who sets her heart on attending an East Coast college in search of culture. This despite a controlling but loving mother (played fiercely and warmly by the terrific Laurie Metcalf) who reminds her she has neither the grades nor the money. What irritates her mother most of all, is her daughter, named Christine, insists people call her Lady Bird. (Tracy Letts plays her doting father, a depressive who just lost his job.)
Lady Bird does typically teenage stuff, like hanging out with her pal Julie (a hilarious Beanie Feldstein, Jonah Hill’s baby sister), and getting her heart broken (played by Chalamet and Hedges). But the heart of the story is Lady Bird’s relationship with her mother, and though they argue and bicker constantly their attachment is deep.
At the film’s press conference, Gerwig told journalists that Metcalf intuitively knew the role. “She didn’t need to expend a lot of time going on about the character. She just said, ‘I think that this is something I need to do. And sometimes things come into your life at the right moment’ And she said publicly at the time, ‘I have currently a 17-year old child who is trying to kill me.’”
On the red carpet I asked Gerwig about the movie’s title. When the film was first announced many people thought it was about LBJ’s wife, Lady Bird Johnson.
“I know, I know,” she laughed. “I don’t know where the name Lady Bird came from in fact. It was something that came to me without me consciously summoning it. It just was one of those things I was writing, and I was struggling, and then I just put everything aside and I put at the top of the page, ‘Why won’t you call me Lady Bird? You promised that you would?’ And I thought, ‘Who’s this character?’ I mean who’s a person who forces people to call her another name? And so I just followed that name, and I followed who that person was. Then I later realized there’s a nursery rhyme, a Mother Goose rhyme, ‘Ladybird, ladybird, fly away home. Your house is on fire and your children are gone,’ and I thought, oh, my brain must have made some connection without me knowing it, something about childhood and references to fairy tales and mothers and nursery rhymes, so who knows? That’s how the creative process works. You can’t control it,” she laughted.
Later during the Q&A after the screening Gerwig said the working title of the movie was “Mothers and Daughters,” and that she kept focusing on that. “I decided to take away anything that felt like it didn’t circle back to that,” but “ I didn’t want to literally spend the whole time of the movie just on the mother and daughter.”
The guy who takes Lady Bird’s virginity, Kyle, is played by currently hot actor Timothée Chalamet, who is getting buzz worthy notice for Luca Guadagnino’s coming-of-age drama “Call Me By Your Name” which also screened at the NYFF.  Gerwig said he initially didn’t understand the guy and if he was supposed to be dumb. “The dreamboat, that guy,” laughed Gerwig, “so I told him, no, he’s not supposed to be dumb, just set in his ways. I showed him some of  Eric Rohmer’s movies about young men talking at young women about their ideas.”
Because Gerwig is from Sacramento — the movie opens with a Joan Didion quote about the California capital — everyone has been asking the director if it is auto-biographical.
“The story is its own and the characters are their own,” Gerwig said. “There’s a core of truth that is connected to who I am and my experiences. And certainly Sacramento is my home town and those locations mean a lot to me and there are things about it that are deeply part of me. But the stories itself and the characters itself are fiction, and the character of Lady Bird actually just naming herself, I never called myself by that name. I just always called myself Greta Gerwig, rule follower,” she joked.
After the screening, which received a terrific reception from the packed audience, guests moved across the street to Shun Lee West for the after party, where the director was joined by boyfriend Noah Baumbach, who’s got his own hit film, “The Meyerowitz Stories,” playing at the New York Film Festival.
photo by Paula Schwartz c2017Showbiz411