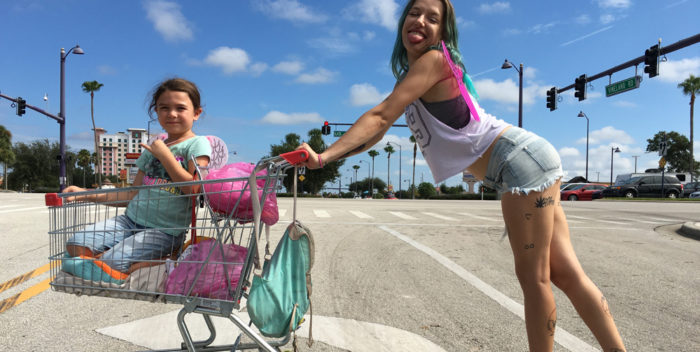 The sublime “Florida Project,” directed and co-written by Sean Baker (“Tangerine”) is an innovative artistic and truly poignant film that opens today in limited release.  Mixing amateur and professional actors, Baker tells the story of a precocious six-year-old Moonee (Brooklynn Prince) and her posse of friends who are grappling with poverty living in a fleabag hotel right next to Disney World.

“The Florida Project” was the name for Disney World when it was in its planning stages.  Willem Dafoe plays Bobby, the often times put upon manager of the tacky purple colored ‘Magic Castle’ motel where the kids and their parents —  mostly single mothers — live.  Bria Vinaite is excellent as the tattooed single 22-year-old mom trying to scrape by doing whatever she must to survive. Vinaite, who never acted before, was found by Baker on Instagram.

Dafoe’s performance is compassionate, gritty and graceful, pretty much guaranteeing him a deserved Best Supporting Actor Oscar nomination. If A24 can swing it (they did with “Moonlight”) “The Florida Project” could easily be a Best Picture nominee this season. Baker’s direction is so fluid, and the whole movie is so organic, you feel that you’ve lived it through it with all the characters. It’s quite an achievement, akin to another indie hit, “Beasts of the Southern Wild.”

I asked Willem at a recent screening what attracted him to this offbeat part?  “That world, which I didn’t know existed.”  He continued: “I’m always attracted to a part when I’m the odd man out. Bobby is half in and half out.  He’s one of them but he’s not.  He’s got this beautiful position that he’s got to run this place and he loves the kids, but they’re also a pain in the ass.  So he’s wearing all these hats.   There’s not a big dramatic scene or transformation so he’s got to go through all these modes. That’s interesting to me.”

I asked him if a big budget popcorn movie was next?  He replied, “You think the popcorn movies pay the bills but that’s not necessarily true.  I work all over the world and sometimes an independent movie needs me for financing more than a big movie does.  And the big ones can take a hell of a long time.  I can do two independent films in the time it takes to do a big one.  So for a guy like me, money is a consideration but it’s not the main thing by any means. I’m just a working character actor.  But this movie, I just love it. I hope it gets out there.  It is a small movie, but people are responding to it.”

North Carolina’s inaugural “Film Fest 919” will be the next festival to tout the film.  Founders Randi Emerman and Carol Marshall, along with programmer Claudia Puig, will launch the festival with the sure to be winning tons of awards “The Florida Project,” on October 25th in Chapel Hill.