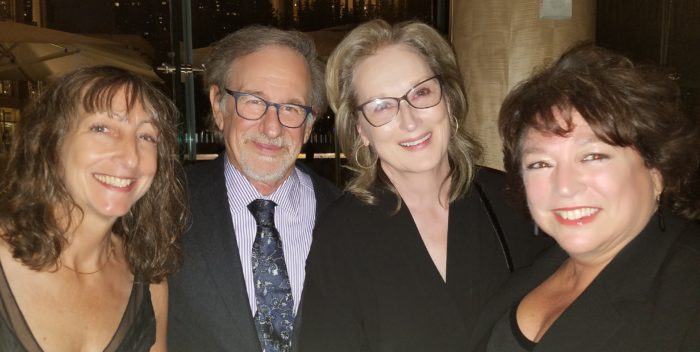 It was just your basic night at Alice Tully Hall for HBO and the premiere of Susan Lacy’s stunning “Spielberg” documentary.

Wait til you see this thing– Spielberg’s nearly 50 years as our star filmmaker are covered comprehensively and entertainingly by Lacy, who last year moved from PBS’s American Masters to HBO. She interviewed everyone important to Spielberg including the filmmaker himself. Plus, she unearthed hours and hours of previously unseen footage Spielberg took in the mid 70s of himself, George Lucas, Martin Scorsese, Brian DePalma, Francis Ford Coppola and friends as they were making their early, career making films. Extraordinary is not a word that even covers it.

“Spielberg” is on the level of the great Sinatra doc that HBO had in 2015.

For Levinson and Spielberg, it was quite a reunion. For years, Steven tried to develop “Rain Man” as a movie. He finally left it, Levinson picked it up and won the Oscar for Best Picture. “I couldn’t nail it,” Steven said as the two men reunited. Spielberg said to me, “I’ll tell you what, if I’d made it it would have been much more sentimental.”

Then Spielberg told me something no one had ever heard before. “You know they give me a lot of credit for developing special effects. But Barry actually created the first ever digital special effect on Young Sherlock Holmes. It’s a scene of a stained glass window that moves.” Levinson directed, Spielberg’s team produced. (It’s a little gem of a film.)

Did Barry know he held that coveted distinction? “I did not,” Levinson responded, with typical humility.

“Spielberg” begins airing on HBO tomorrow night. You’ve never had such a good reason stay home on a Saturday night. The minute it’s over you’ll want to watch “Close Encounters,” “ET,” “Munich,” and “Saving Private Ryan” immediately, not to mention “Schindler’s List,” “Sugarland Express,” and “Catch Me If You Can.”