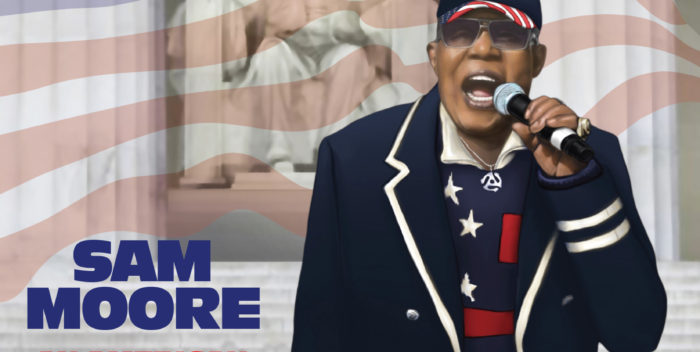 Right now now one knows what it means to be patriotic, left or right, liberal or conservative, knee or no knee. Into that atmosphere comes R&B Legend, Rock and Roll Hall of Famer Sam Moore, who turns 82 on October 12th. The one and only original Soul Man did shows with Martin Luther King, Jr. and performed at Dr. King’s Madison Square Garden memorial in June 1968. He’s sung for Clinton, Obama, Bush and Bush — separately and together. (They all love him.)

“Sam Moore: An American Patriot” showcases Moore’s extraordinary voice– he was named to Rolling Stone’s list of top 100 singers of all time. His covers of “America the Beautiful” and “Battle Hymn of the Republic ” are gorgeous and stirring. Sam’s voice can shimmer like glass in the sunlight and then shatter that glass. He still has that ferocious energy from the Sam & Dave days of lifting off a stage like he was attached to an Apollo rocket.

But then I’m torn. “American Patriot” also includes wonderful covers of “Imagine” an “What’s Going On” as well as Sam’s original “Show for You,” which was written for the Warrior Games in Chicago this past summer. And an uptempo number, also an original, called “Peace Please,” should be played in every football stadium. So should his version of “God Bless the USA’ aka “I’m Proud to be an American” — the best version I’ve ever heard.

PS Someone tell the NFL and NBC– Sam’s “Star Spangled Banner” is what America wants to hear right now.