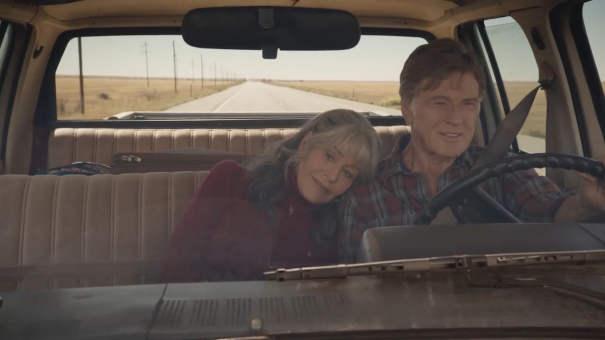 The very stupid Megyn Kelly could not keep Hollywood royalty like Jane Fonda and Robert Redford down last night. Netflix threw them a star studded premiere for their new film, “Our Souls at Night,” which premieres Friday on the streaming service but also opens in theaters in New York and Los Angeles.

The Fonda-Redford screening was at the Museum of Modern Art followed by a packed reception at the Oak Room of the Plaza Hotel. Megyn Kelly was the farthest thing from anyone’s mind during the night. I ran into a ton of stars including my old pals actress Brenda Vaccaro and former Today show host Jill Rappaport (who’s got her own show now).

But the focus was on Fonda and Redford who previously starred together in “Barefoot in the Park” in the 1960s and Alan Pakula’s “The Electric Horseman” in the late 1970s. They’ve always wanted to do another film together. “Our Souls at Night” is based on the best selling novel by the late novelist Kent Haruf.

A sparsely told tale in print, “Our Souls” comes alive on screen with these two famed actors. They each give exquisite performances, detailed and moving. Each of the characters– Addie and Louis– has been widowed for some time in their small town of Holt, Colorado. One day Addie simply knocks on Louis’s door, says she’s lonely, and proposes that they sleep together at night– not sex, just sleep and talk.

Soon it comes to more than that– not just sex–but a deeper understanding of how the two people have conducted their lives. “Everyone has a past,” Addie says to those who question the relationship. There has to be a time when all is forgiven. Life is too short to hold on to mistakes.

Netflix is on a roll this week. “Our Souls” will be joined by Noah Baumbach’s “The Meyerowitz Stories,” one of the best movies of the year, next week. But for fans of beautifully made films, “Our Souls at Night” should be a go-to choice this weekend on the streaming service.