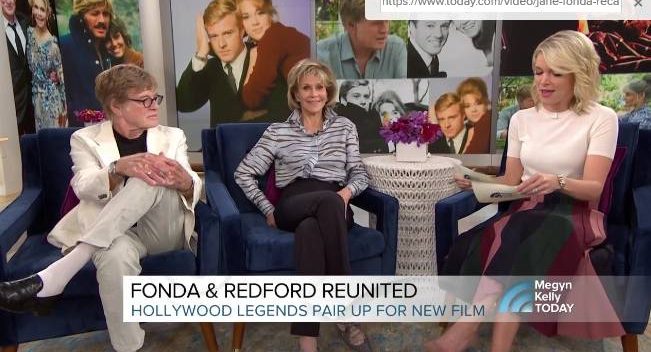 Maybe Megyn Kelly is not cut out for interviewing celebrities. Or talking to people.

This morning she insulted two time Oscar winner Jane Fonda on live TV. Fonda was on Kelly’s 9am Today show hour to talk about her reunion with Robert Redford in the excellent Netflix movie “Our Souls at Night.” A few minutes into the conversation, Kelly decided to ask Fonda about her plastic surgery. It was a jaw dropping moment. On the video you can see Fonda’s eyes flare. But she’s a pro and segued into a better answer with aplomb.

God only knows what went on backstage. And this was in front of Robert Redford, who never does TV. He won’t be back.

On Monday, Kelly had the “Will & Grace” cast on, as well as a real life gay lawyer who loves the show. Kelly insulted that man not once but twice.

First Kelly said to Russell Turner: “Is it true that you became a lawyer — and you became gay — because of Will?”

Turner replied: “I look at Will Truman, I’m like, ‘He has it made’: lawyer, best apartment in New York City, and gay?” he quipped. “Come on, trifecta.”

Then as the segment was ending, Kelly said to him: I think the Will & Grace thing and the gay thing is going to work out great!”

“Will & Grace” star Debra Messing was furious. She later tweeted that she’d never have done the interview if she’d known it was with Kelly. She thought she was going to be on the actual “Today” show.

Kelly is out of her league on the Today show, and a far cry from the nice Tamron Hall-Al Roker show she has unceremoniously replaced.  A gaffe here and there is ok. But she’s aggressively stupid. She’s very reminiscent of Debbie Matanepolous or Elisabeth Hasselbeck. And we know what happened to them.