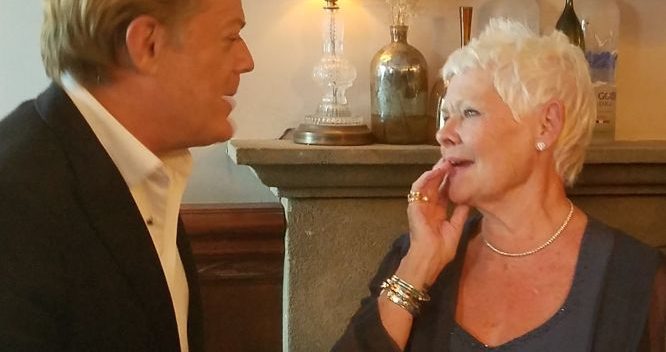 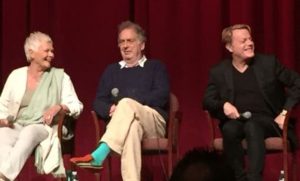 At the west coast DGA screening tonight of Stephen Frears’ “Victoria & Abdul,” an audience member asked Judi Dench during the Q&A: “Would you rather be a Queen or a Dame?” She responded with typical irreverence:  “I’d rather be a slut.”

That took the house down.

Director Stephen Frears instantly added: “Well, that’s how I think of you, Judi.”

Co-star Eddie Izzard: “Keep it classy, call yourself Dame Slut. That should be your rapper name.”

I spoke with Eddie before the screening.  What did he think about playing complicated Bertie?

IzzardL “Bertie was a dick.  But I get it. Bertie wanted to be King.  It looked like Mum was eating herself to death.  Then this guy Abdul shows up and gives her another 10 years of life.  You would feel a little pissed off.   If that’s the only way to advance you can become the King.  I had to put on 25 pounds, move entirely differently, and drop my voice down.  He’s a buffoonish character at the beginning of the film, and then it gets darker and more twisted.  It’s quite a fight going on.”

Did Eddie, known to like to dress up in women’s clothes, ever want to wear Judi’s costumes?

“No,” he laughed.  “I’m not into that if you look at my style. What I wear is the stuff that women stole from men, which is jackets jeans and boots, that kind of thing.  Which is not Queen Victoria.  She’s strapped into a load of corsets.  Even Bertie’s costumes I wouldn’t wear, but I liked the cane.  The canes were cool.  “ What’s up next for him? “I wrote my first film ‘Six Minutes to Midnight’ which I’m doing next year, still working on that.  I’m developing my next stand up show in French in Paris.”

I then spoke to Dame Judi about re-visiting the character she played in her Oscar nominated ‘Mrs. Brown.’  How did I feel to play her again?“  “Lovely,” she answered. “ I didn’t know this story like many people didn’t.  Suddenly to find she had a further life and a reason to go on living.  Stephen Frears directing, and the very, very good script.  So I was thrilled to re-visit her.”

“Victoria and Abdul” — the story of Queen Victoria and her Indian consort– opens September 22nd.