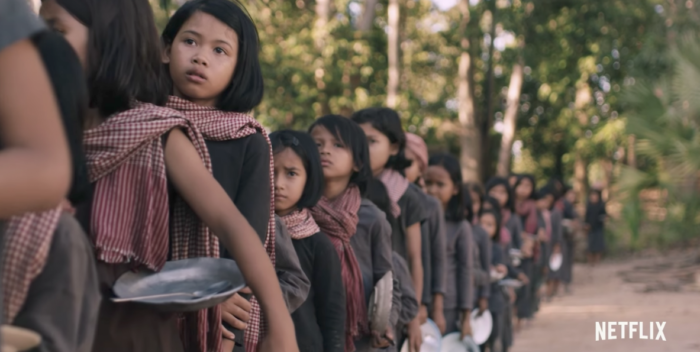 Jon Voight is certainly back in daughter Angelina Jolie’s inner circle. He came with her and the kids to the NY premiere last night of her extraordinary new film, “First They Killed My Father.” (And second, they made up with him. Par umpum!)

Hard to imagine how this whole rapprochement works since Jolie and Voight are further apart on the political scale than Patti Davis was from her parents, Ronald and Nancy Reagan. But maybe it’s a lesson to a lot of families split by the current political climate. Blood is thicker than water. The lesson of family is the underscore for “First They Killed My Father.”

Certainly we learn that from Jolie’s film, which would be hailed as a “masterpiece” if it had been made by Spielberg or Eastwood. “First They Killed My Father” should put Angelina right in the ranks of the top directors– it’s an astounding achievement on a grand level and really deserves a Best Picture nomination.

It’s on the level of one of Eastwood’s best films, “Letters from Iwo Jima.” There is no English spoken. Much of the movie is Cambodian or Vietnamese. A good deal of it is without dialogue as child star Sareum Srey Moch navigates holy hell as the Khmer Rouge threaten to obliterate her country. All the children are exceptional, and you can tell that they really responded to Jolie. The really extraordinary move Jolie makes as a director here is that she has no adults, and no “Stars”– there is no ‘draw’ of a name. You don’t suddenly see a Movie Star show up as guide through the film. That’s how confident she is.

The film is based on a book Jolie bought for $2 the first time she went to Cambodia 17 years ago. “First They Killed My Father” is written by Loung Ung (played by young Moch). Loung came to the Toronto Film Festival and to last night’s NY premiere with one of her brothers, also portrayed in the film. They are a shining example of why immigration is so important. After the harrowing true events of the movie they came to the US and grew up in Cleveland. They are all incredibly accomplished, great successes. More importantly, they are alive and well. Meeting them takes your breath away.

The reunion with Jon Voight certainly comes from the lessons of the film. The whole point of the film– far more than the political– is the fabric of Loung’s family knitting back together. It’s a metaphor for Jolie’s life.

See this movie. And let’s hope it does well enough that brings awards and recognition for Jolie as a filmmaker at last. She deserves it.