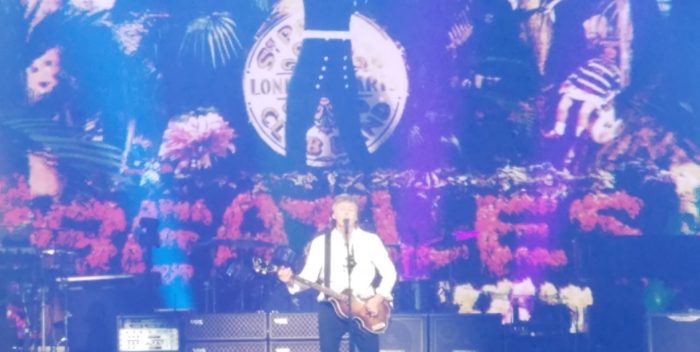 You do know that it isn’t 1964.  It’s 2017 and Paul McCartney is 75 years old but no one has told him. The once and former Beatle, the most successful songwriter in history, put on a three hour show last night at the Prudential Center in Newark. It was an uninterrupted three hour show. He didn’t even take a sip of water. He actually didn’t seem to perspire. He played 38 songs from the first ever Beatles song to a number he wrote for Rihanna last year.

Looking eons younger than 75, Sir Paul– clad in a white dress shirt, slim fitting jeans, his shaggy hair over his collar–led a four piece band on guitar and piano and simply defied gravity. It was his second show in Newark before heading to Madison Square Garden, the Barclays Center and Nassau Coliseum for six more shows. And if this was a “preview” night before opening in New York, I can only imagine what’s coming. God bless Paul McCartney. 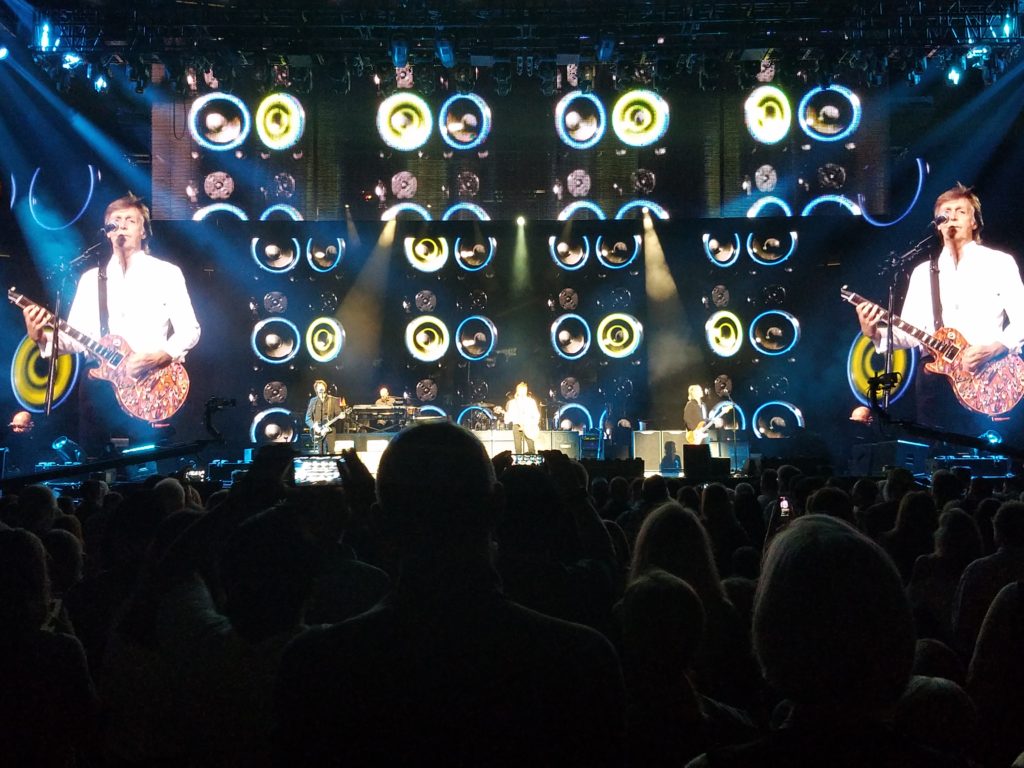 The range of material is astounding, too, from the classic Beatles hits to the solo best sellers, there isn’t a clinker in the set. He does include two songs, “New” and “Queenie Eye” from his most recent album. They’re very good but even Paul knows the fans want they want. (He said so, ruefully.)

Otherwise, it was a repertoire of songs from a genius. Imagine if George Gershwin had lived long and went out occasionally to play his hits. That’s what this was like. From the first Beatles recording– “In Spite of All the Danger”– through classics like “Eleanor Rigby” and “Yesterday”— McCartney inhabits a rare place in Western Culture. He does tributes to John Lennon, George Harrison and George Martin, mentions “Maybe I’m Amazed” was written for his late and beloved wife Linda. He also plays the lovely song he wrote for current wife Nancy (“My Valentine”). All bases are covered.

At 75, he’s throwing in a bit of Hendrix, all of “Helter Skelter,” and rocking the roof off a 20,000 seat arena. There is nary a pause between guitar solo and piano lead. “Hey Jude” is one big party. “You Won’t See Me” is more contemporary sounding now than ever. “I’ve Just Seen a Face” solidifies the Everly Brothers.  During the majestic “Let it Be” I wondered what it must eb like to be 75 and still singing about your mother’s untimely death 60 years ago.

The voice remains. Sometimes it grows hoarse, and then it recovers. Even with infelicities it shines. Paul tells more stories now, about the early Beatles days, about John, about how they were really pals with Mick and Keith and even wrote the Stones’ first hit — “I Wanna Be Your Man”– which he then plays. (Ringo sang it originally, and performs it with his All Starr Band on the road.)

The Prudential Center is a little more intimate than Paul’s coming venues– I’m glad I saw him there. In 1976 I slept outside the then Capitol Center in Largo, Maryland to see his first American Wings tour. Forty one years have passed. So much has happened in our lives. And yet, Paul McCartney remains unchanged as an artist if not just better.  Don’t miss this tour. It probably won’t be the last. But see a an artist who’s still in his prime, whose prime never ends.