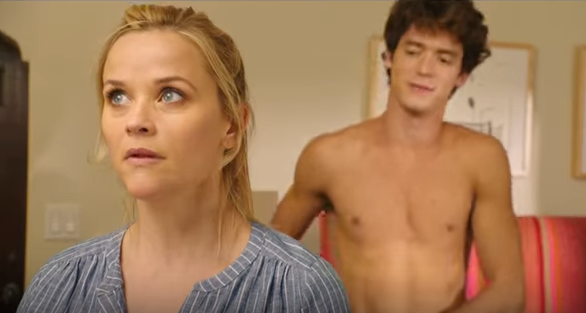 At the recent premiere of Reese Witherspoon’s “Home Again,” (released September 8th) at the DGA in LA, Reese was on full display with her trademark Southern belle charm. “I hope y’all like the movie,” she chimed. Reese is always appealing, but this film is clueless, sexist and at mostly just down right offensive. Sorry Reese, nothing to like here.

“Home Again” is written and directed by thirty-year-old Hallie Meyers-Shyer, daughter of filmmaker Nancy Meyers (also a producer on this film) who directed and co-wrote Private Benjamin, Father of the Bride, It’s Complicated and more, many with her husband at the time Charles Shyer.  The Shyers’ success reveals itself in many of their films with their luxurious houses and their Cadillac problems.  Unfortunately their daughter, while showing talent in an occasionally witty script and well-paced film, falls into the same trap.

Reese plays Alice Kinney, a spoiled housewife, trying to make it in the world with her ‘hobbies,’ having recently moved back to her native LA from Manhattan. Alice’s marriage to music executive husband (Michael Sheen) is falling apart.  Alice happens to be the daughter of a deceased famous filmmaker (isn’t everyone?)  Hence she moves back into a glorious home, with her two perfect adorable daughters and her doting mother, played by the wonderful Candice Bergen (who has the best zingers in the movie) popping in and out.

Reese and her equally bored privilege friends whoop it up at a swanky nightclub for her 40th birthday, meeting a trio of young aspiring filmmakers played with charm by Pico Alexander, Nat Wolff and Jon Rudnitsky. She starts an affair with one of them (Alexander and there is zero chemistry there).  She lets them live in her home and care for her kids, as well as fix her computer. Let’s add that the storyline is sexist because how dare Alice sleep with a younger man!  Really? How often, meaning always, do men in movies and in real life do that?

All through this Alice  is just oh so confused.  “I’m terrified,” cries Reese in front of a mirror.  Really? What are you terrified of, Alice?  Your life is perfect, your world of yoga parties and designer clothes, a home with a guesthouse, pool and outside barbecue with a table always set for a banquet, money pouring everywhere, healthy happy kids and you not earning a dime.  Well, not entirely. Alice tries to be an interior designer, after her friends say she should because ‘hey why not?’  And her client, (her only client FYI) also a fellow spoiled entitled woman, played by Lake Bell, (who has a daughter named Gwyneth, so inside chic)  is just so mean to her. Boo hoo, lets bring out the violins.  As if it’s the first time poor Alice is in the big bad world we all have to live in.

We get that this is about her journey and a crossroads in her life.  But Hallie Meyers-Shyer would have better served her obvious talent off to not go to what she and her family knows, the privileged life.  Alice can do anything she wants, her so called journey is from A to B.  She has a kind of freedom that most people just don’t have.  So it’s virtually impossible to root or feel anything for any of these characters.  Even the filmmakers have such rapid success that is just too unbelievable. No struggle. The recent “Patti Cakes,” is the opposite.  An overweight girl from a poor town in Jersey.  That film is truly endearing. This film is the opposite.  You don’t care about the characters at all.  This film is  tone deaf to any kind of reality, not one African American or Asian with one quick exception.  “Home Again,” is offensive entitlement of the worst kind.