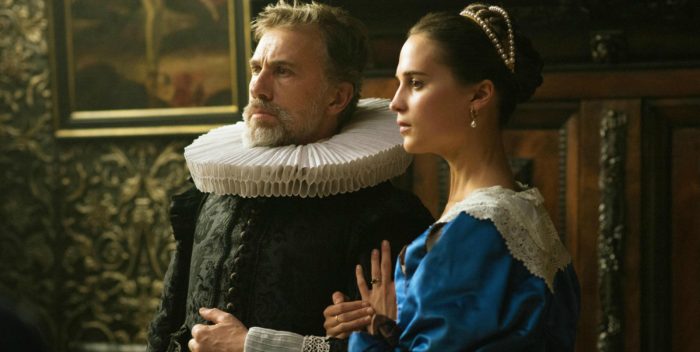 I’m holding this spot until 1pm when the “Tulip Fever” embargo breaks. That’s when the piling on will begin because good or bad, “Tulip Fever” has become a meme in social media. Justin Chadwick directed the movie based on the novel. Steven Spielberg was supposed to direct it years ago, but financing fell apart.

Why or how it proceeded from there is another story, but it’s here now after many release dates were missed. Alicia Vikander, Dane DeHaan, Jack O’Connell, and Christoph Waltz star. One thing is clear: “Tulip Fever” is beautiful to look at. There was no stinting on production design, costumes, lighting, scenics.

The screenplay is by Tom Stoppard, who counts among his many achievements “Shakespeare in Love.” This movie looks like that one, except without Shakespeare.

Is it “Days of Heaven”? or “Ishtar?” Any of the terrible misfires of 2017 so far, from “King Arthur” to “Rough Night”?  No. Nothing like that. But hold on. I’ll tell you more later this afternoon.

Is it good, is it bad, what’s the big deal? Sumptuous to look at, “Tulip Fever” is simply uneven and rushed. Justin Chadwick’s direction is all over the place. But that doesn’t mean the movie doesn’t have a lot of good things going for it. The acting is top notch. I really liked Jack O’Connell in the main supporting role. He actually has more chemistry with Alicia Vikander and Dane DeHaan.

You could ask, where have all the flowers gone? One thing “Tulip Fever” is missing is…tulips. You know if Martin Scorsese had shot this movie like “The Age of Innocence,” we’d be awash in them. Lots of them. You see, all of Amsterdam is engaged in buying and selling of tulips as commerce in the mid 1600s. They are passionate about it. and money is flowing.

Wealthy Mr. Waltz has married for the third or fourth time, to the much younger Vikander, desires an heir. He also hires a young Rembrandt like painter (DeHaan) to execute their portrait. It’s not much of a leap to see the younger people are going to get it on under the older husband’s nose. In a subplot, Vikander’s ladies’ maid (Holliday Grainger) is shtupping O’Connell, who’s come up with a way to make money in tulip trade.

“Tulip Fever” doesn’t know whether it’s a Judi Dench type historical piece, or a Cinemax Late at Night sex romp. There’s a lot of sex, at least in the first half, kind of gauzy and soft core. It’s like “Lady Chatterley’s Lover” with a Harlequin cover. It’s all rapidly told so we can get to the plot, and the mechanism that spurs us along to the third act. And that’s where things get wonky. The film has moved so fast that the big reveal is anti-climatic. And then no one knows what to do.

And still, for TV, for other platforms, “Tulip Fever” will play just fine. It’s far ‘less worse’ than a half dozen other big movies this season. Once Stoppard’s structure kicks in you can’t help but pay attention and even care some for Vikander’s peril. I think the biggest problem is here is what happened to the release. If “Tulip Fever” had just come out, no one would have cared. Now curiosity is piqued– for the wrong reasons. It’s a handsome little romp. There’s nothing wrong with that.