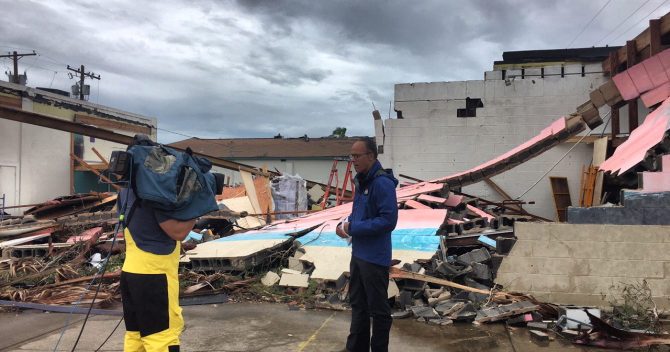 Where in the world is David Muir? The ABC anchor has been MIA since the beginning of Hurricane Harvey, the biggest story for network evening news in eons. Muir has been like The Ghost and Mr. Muir– unseen. And no word from him on social media. It’s weird. When you’re an anchor of one of the Big 3 newscasts and something bad happens, you come home from vacation. Immediately. (UPDATE He’s on vacation, most likely enjoying the Tuscan sun or Provencal cuisine. An insider says Muir was told the ABC was bench was deep and he needn’t return.)

Muir’s absence has been to the benefit of Lester Holt, who put on his big boots and got in the water. On Monday and Tuesday this week, Lester beat ABC World New Tonight in the key demo 25-54 handily. You can see the numbers below. Around 400,000 ABC viewers didn’t come back from Monday to Tuesday. The same number didn’t return to NBC, but the difference was that younger viewers stayed.  On Tuesday night, NBC had 500,000 more key demo viewers than ABC.

CBS Evening News, which I like a lot (it’s very well written) remained in third place. But it’s got a lot of quality, and Anthony Mason is doing a great job. Norah O’Donnell puts on the rainboots for the Tiffany network. And she’s doing swell, too! UPDATE here, too: Mason didn’t do Thursday night’s show, as CBS seems to have given up the ratings war.