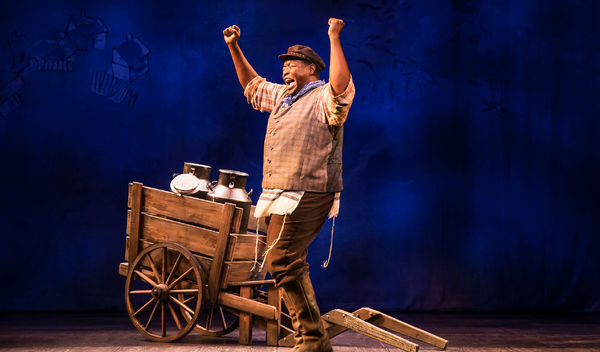 There is much to love in “Prince of Broadway,” legendary producer-director Hal Prince’s tribute to himself. I mean it: the show is like a late summer gift. It has an overture, nine really sensationally talented performers, classic sets, and music– mostly Sondheim– that is gift-wrapped.

The only nick in the armor: there’s not much of a story. Prince’s story remains undeveloped despite all nine actors giving parts of his life. But that doesn’t matter. He’s 89, and Hal Prince has done more for Broadway, theatre, arts and culture than any 50 people.

All you need to know is that Tony Yazbeck, who’s Broadway’s stealth secret weapon, has dance number (choreographed by Susan Stroman) singing “The Right Girl” from “Follies” that literally channels Gene Kelly. This man needs his own show and a Tony Award ASAP.  He should be a Star already. Let’s get going.

Chuck Cooper– who the heck is he? He’s been in 14 Broadway shows over 20 or 30 years, all flops. Here he is, an overnight sensation. He sings– as Tevye– “If I Were a Rich Man” from “Fiddler” and does a “Sweeney Todd” with the amazing Karen Ziemba (who’s a delicious Mrs. Lovett) both of which left the audience cheering.

In each case I thought, ok, revive these shows with Chuck Cooper. I asked around: the insiders know him.  Someone, do something. Yes, he’s a black Tevye. He was effortlessly entertaining.

Emily Skinner fought off the Elaine Stritch cloud hanging over our heads and wrestled “Ladies Who Lunch” to the ground. She won. Elaine is smiling in heaven.

The rest of the cast– Brandon Uranowitz, Janet Dacal, Bryonha Marie Parham, Kaley Ann Voorhees– are excellent. Michael Xavier, coming off a hit run in “Sunset Boulevard,” is phenomenal. Everyone has a showstopper.

I learned a couple of things: Andrew Lloyd Webber, unlike Stephen Sondheim, does not age well. “Sweeney Todd” seems like Handel’s “Messiah” compared to “Phantom of the Opera.” Also, famous actors who originated roles they became famous for aren’t that excited to see new people try them out. Just sayin’…

“Prince of Broadway” runs through October at Manhattan Theater Club. Get over and see it. This is one gift you can accept happily.