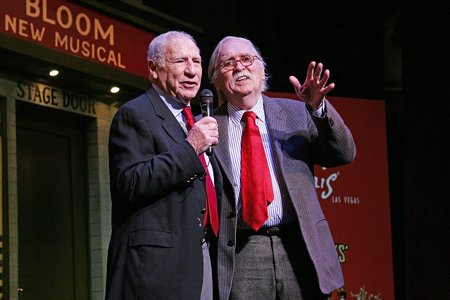 Tom Meehan has died at age 88. My friend and neighbor, who I was lucky to know, was a Broadway superstar when it came to writing books of musicals. He co-wrote “The Producers” and “Young Frankenstein” with Mel Brooks for the stage, wrote “Annie,” “Hairspray,” “Rocky” and many other shows. He was married to Carolyn, his lovely wife, for eons. They lived down the block from me, but over in the West Village Carolyn had a very popular children’s store, Peanut Butter and Jane. An era has ended.

Tom was really a gentleman in the true sense of the word– a gentle man. He looked a little like Colonel Sanders with his gleaming white hair and glasses. He was also a genius. He knew how a story worked, and why it didn’t. We had long discussions about new shows, old shows, opening nights, and so on. My friend, producer Judy Gordon, and I used to eat lunch at a place that’s gone– it was padlocked for not paying taxes– on the Upper East Side. Tom, Mel, and Anne Bancroft would inevitably be at Madame Romaine’s having omelettes and writing “The Producers.” They did the same with “Young Frankenstein.”

Mel just Tweeted that he heard Tom had died. “Stunned by the news that my friend/co-writer Tom Meehan has died. I’ll miss his sweetness & talent,” he writes. “We have all lost a giant of the theatre.” It’s true. We used to ask Tom all the time isn’t there some way to turn “Blazing Saddles” into a musical? Mel wanted to do it. Tom — who could have made a fortune, said, “I just don’t see it.” If it wasn’t right, it wasn’t going to happen.

Condolences to Carolyn, and Tom’s whole family. Our block, and the theater at large, will never be the same.