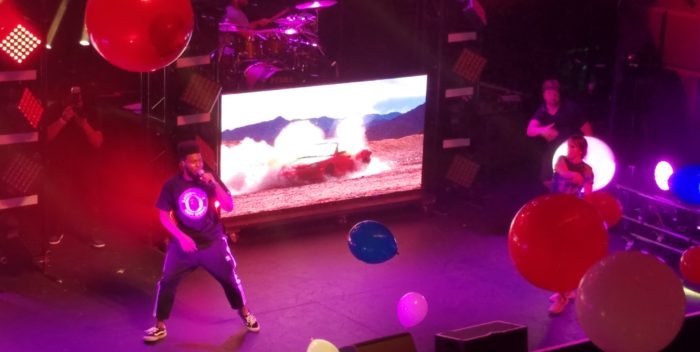 Last night Khalid fans were literally hanging from the rafters at Terminal 5. His fans– a mixed group of black and white, teens and young twenties– knew all the words to all his songs, even “Silence,” which was released on Friday. It was the 21st stop on his first real national tour.

Did I tell you Khalid, from El Paso, Texas, just turned 19?

The middle child of military parents, Khalid put a few of his songs on SoundCloud from Texas. A manager in New York, Courtney Stewart, heard them. Next stop: RCA Records. Forget “American Idol.” Khalid, whose album, “American Teen,” was released on March 3rd, is off like a rocket.

The songs are all so catchy they’re hits once you hear them. RCA has spent the last six months breaking him on radio. Why “8 Teen” isn’t the song of the summer I don’t know. The title track, plus “Young, Dumb & Broke,” “Saved,” “Coaster” — recall The Weeknd, Usher, Babyface, and a half dozen other R&B crooners. Khalid, just hatched, is their natural successor.

You can catch him tonight again at Terminal 5 (they had to add a second show). He’ll be in Los Angeles soon– don’t miss him there or anywhere in between. Clean cut (as yet, we cross our fingers for the future) Khalid is so ready for the Grammys and success I just hope none of it will spoil him. His show consists of all 15 songs from the album plus two new ones. He’s pretty much on stage by himself, with two dancing cheerleaders (love the pom poms) and a crack band that propels him.

On a weekend when things looked pretty bleak in the world, Khalid was very reassuring. There’s nothing like pop songs to save the summer.