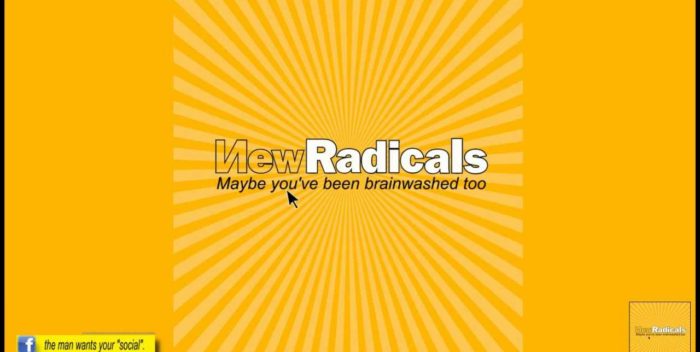 Back in 1998, no one was listening to vinyl much. So when the New Radicals’ “Maybe You’ve Been Brainwashed Too” was released, it came out only on CD and cassette tape. It became the greatest cult album of the 1990s with two massive radio hits still heard today, “You Get What You Give” and “Someday We’ll Know.”

The singles were monsters. The album was a big hit. So where was the follow up? Gregg Alexander wrote or co-wrote all the songs and sang them. His sometime collaborator was Danielle Brisebois, known to TV audiences from “Archie Bunker’s Place” and “Knots Landing.” They had it made in the shade.

But after all the publicity and hype, Alexander just wanted to be a songwriter. No more New Radicals. They went the way of the Bay City Rollers and The Knack, into trivia books. Alexander scored “Game of Love” for Santana and Michelle Branch among his many penned hits. Then he and Brisebois wrote the song for John Carney’s sleeper film, “Begin Again.” Adam Levine sang “Lost Stars,” which earned an Oscar nomination. And life went on.

At Clive Davis’s Grammy dinner this past February, Joni Mitchell lit up when I asked if she wanted to meet Alexander. She said: “When I heard that song, I changed my mind about quitting the business. I was done. I wasn’t going to do anything more. But that it is the most brilliant song. I am so happy to meet you.”

Gregg told Joni that around that time he’d had a dream about her. Like most great songwriters, Alexander holds Joni in high esteem. He said, “I don’t want to sound stalkerish. But I knew all this had something to do with you.”

Joni was pleased to hear it. “I’ll tell you, I was really going to quit. But that song gave me hope.”

Universal has issued “Brainwashed” as a two LP set on gold vinyl. The beauty of the album is that it’s not just a two hit wonder. All the tracks could have been hit singles. If you love pop music, “Brainwashed” is to the 90s what the Raspberries were to the 70s. It’s like a lavish delicious dessert with lots of nutrition.