It was last October when I first reported there was trouble at the Friars Club. A former employee had filed a sex harassment lawsuit against a member who functioned as a defacto exec. There were many discrepancies in the famed club’s finances. Longtime members had been suspended. When I brought it up, no one had asked any questions about what was going on.

Then came the Valentine’s Day massacre. The FBI and Federal Postal inspectors descended on the club took all their records. Of course, that’s when everyone wrote the story like it was brand new. But readers of this column know we were first to report the Friars were going from the fire to the frying pan.

Now I’m told we’re about to hear from the US Attorney’s office, Southern district, any minute. Could be this week, could be next. But when it happens, my sources say, the Friars are going to have a lot of explaining to do in federal court. Large amounts of money are missing from the Friars books. Someone’s going to be held accountable. 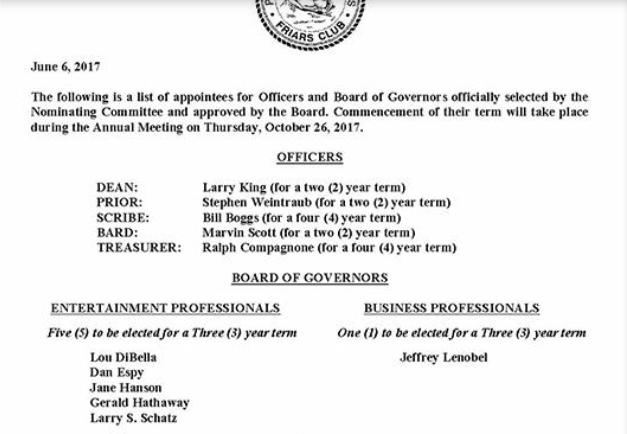 The irony here is that if any case goes before a jury they will have confusion — the president of the Friars is named Michael Gyure, which rhymes with…You get it.

I’ve obtained the election ballot for this fall’s annual meeting on October 26th. One name conspicuously missing is Bruce Charet. He was the subject of the sex harassment suit. He used to be listed as Scribe. The role will now be filled by popular local host and actor Bill Boggs.

The Friars are definitely in trouble. A few weeks ago their “roast” of D list actor Gary Busey was such a bust that it was held at the club instead of a big hotel. You might ask why Busey, who’s a notorious failure in Hollywood. Friars Roasts used to be cool. Now they’re mildewy.

The US Attorney may be investigating this page from the Friars 2015 Form 990, which I first posted last October. Somehow their two events combined left them with MINUS $1.3 million. And the biggest drain, The Lincoln Awards, were like the Titanic of awards shows.