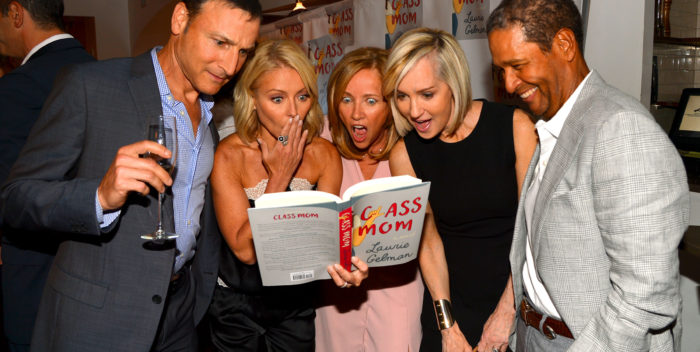 Laurie Gelman– I knew her as Laurie Hibberd a thousand years ago. She married “Regis and Kathie Lee” producer Michael Gelman, they are happy as clams with two beautiful teenage daughters. All that time, while Gelman was getting “chewed out” by Reege, Kathie Lee, Kelly, et al–  Laurie was watching and waiting. The result is that she’s written a very funny novel called “Class Mom.” It’s the beach read for the summer of 2017.

Last night at trendy Loi Estiatorio on West 58th St., Laurie celebrated “Class Mom” with a select group of media people I think they and I have known most of our adult lives. Among the guests: Regis and Joy Philbin, Kelly Ripa, Bryant Gumbel, NY radio star Marc Simone, actor Richard Kind, Peggy Siegal, Elizabeth Vargas, Dan Abrams, Rosanna Scotto, ABC’s David Muir, plus star agents Richard Leibner and Carole Cooper, and lots of current and former “Live” staff, plus the actual class moms who Laurie based her book on.

I don’t know who gave the nicer speech– Michael supporting his wife, or Laurie (who’s a sweetheart) thanking her husband and everyone in the room. It was an “aw shucks” kind of night. And just wait til “Class Mom” gets made into a movie, because that’s what’s going to happen next– count on it.

PS Laurie is scheduled to appear on “Live” this Friday as a guest. By then, everyone had better have “Class Mom” in hand!