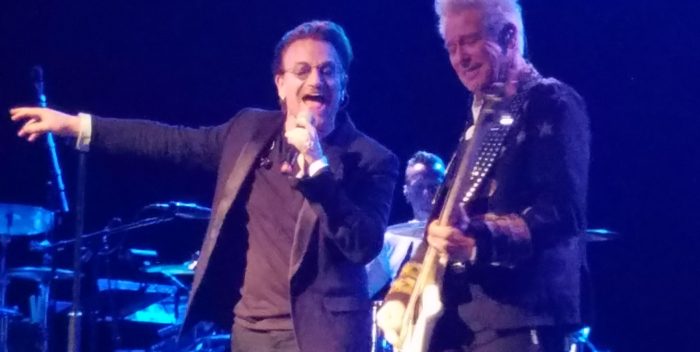 You’d think everyone in Times Square would have known that U2 was putting on a mini show tonight at the Playhouse Station Theater on 44th and Broadway. (This was once the Loews Astor Plaza movie housw where I saw the “Star Wars,” “Superman,” and Indiana Jones movies. But I digress.)

Sure enough the super rock group, about to play the Meadowlands Giants Stadium for two nights, rocked out in front of around 200 people Monday night as a tribute to their bassist Adam Clayton, who was honored by MusiCares. It’s the Grammy Foundation’s kick off of their upcoming year in New York, with the Grammys at MSG on January 28, 2018. 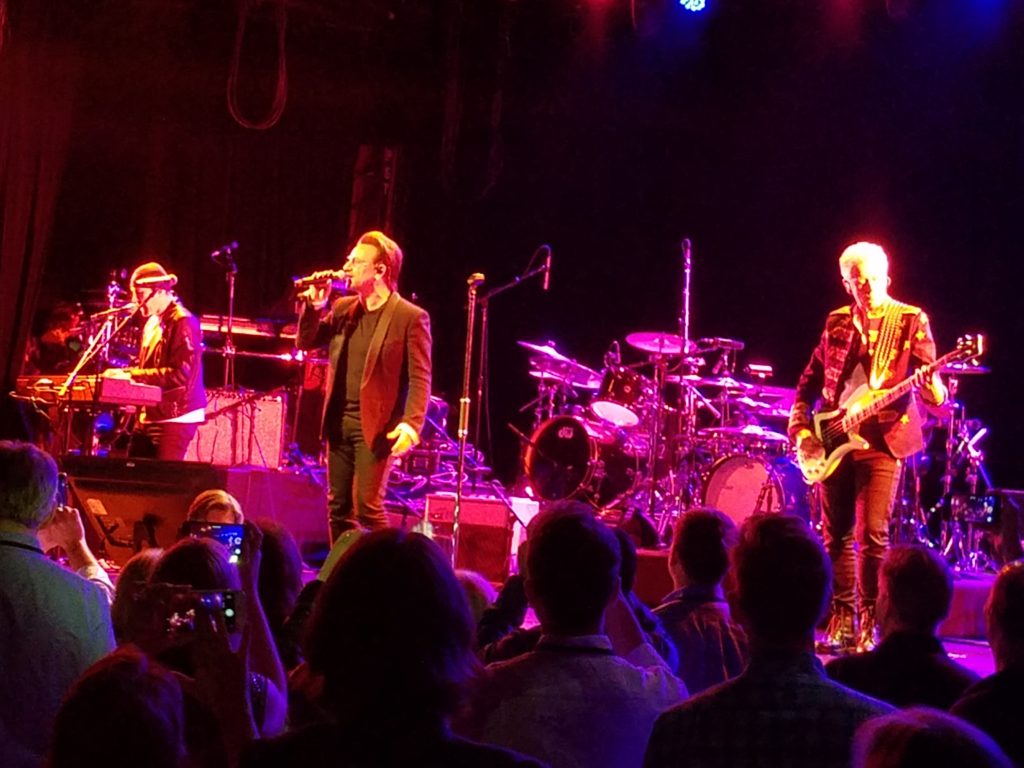 In front of a wheel heeled group of honors, several other artists saluted Clayton and the band first including Macy Gray, the Lumineers, Michael Franti, Chronix, and a sensational UK based performer named Jack Garratt who could break big this year. He’s outstanding. Macy Gray– we’ve underestimated her somehow over the years. She gave a performance of “I Still Haven’t Found What I’m Looking For” with Hal Wilner’s band that was meteoric. I hope someone recorded it.

Island Records founder Chris Blackwell, who just turned 80, and signed U2 decades ago, came to make the toast to Clayton. He was preceded by NARAS president Neil Portnow, who’s made the Grammys and MusiCares into international brands. I also ran into MusiCares chief Dana Tomarken, and loads of MusiCares directors. This organization is vital to the actual health of musicians all over the US. It’s always my number 1 choice of groups to give to in entertainment.

But I digress again. Adam Clayton gave a very moving acceptance speech (he’s really a sweetheart). He said that both Eric Clapton and Pete Townsend– poster boys for drug abuse– helped him get clean, and thanked them. He also thanked his bandmates (Bono, The Edge, Larry Mullen), his wife, and U2’s long time (now retired) manager Paul McGuinness.

Meanwhile, current manager Guy Oseary had good reason to be beaming from the audience. The band — yes, U2– surprised the audience and hit the stage with “Vertigo,” “I Will Follow,” and “Stuck in the Middle.” It was extraordinary to seem them up close and in such a small setting. After 40 years, U2 is a well oiled machine but like the Rolling Stones live, they summon excitement by remaining fresh. Wow.

“Imagine,” Bono said, grinning from the stage, “we’re in band with Adam Clayton!”