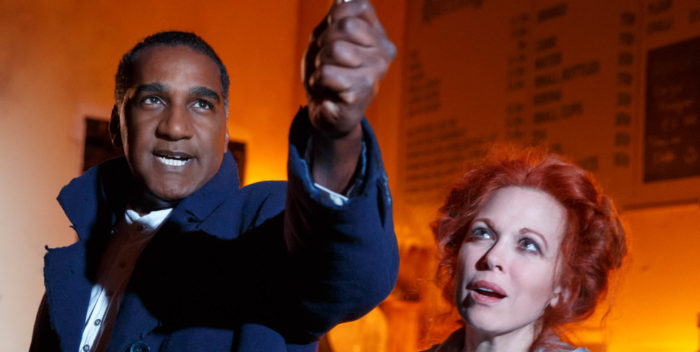 Three decades of love for “Sweeney Todd” were only amplified last week when we finally got to see Broadway stars in the Tooting Arts Club production down at the Barrow Street Theater. You may recall back around March 1st when the Tootings brought their pie shop version of the Sondheim masterwork to Greenwich Village. Eight players, three musicians and some hot pies. It was a total success.

But then some of the Brits were “deported” in early April, replaced by Broadway superstars Norm Lewis and Carolee Carmello as Sweeney and Mrs. Lovett. American Brad Oscar remained as the Beadle, and the actors playing Antony and Johanna–Matt Doyle and Alex Finke– also stuck around. Now, too, we have Jamie Jackson as Judge Turpin, John-michael Lyles as Tobias, and Stacy Bono doing double time as the Beggar Woman and Pirelli the barber. They are all superb.

The Barrow Street Theater has been transformed into Harrington’s, a replica of the real London pie shop where this production began. If you pay a little extra, they will serve you a hot meat pie with truffled mashed potatoes in the pie shop before the show starts. They’re very good, and in this era of immersive theater, this is probably the quintessential “Sweeney Todd” experience. You almost even get the close shave if you’re a man with a shiny pate.

There’s very little anyone could do to wreck “Sweeney Todd,” so we’re always safe. It’s just about perfect, and Stephen Sondheim is always lurking. Carmello is a new Mrs. Lovett and most welcome. Even though the princess of meat pies is demented, she’s also the humor that mitigates Sweeney’s murderously serious obsession. From the minute Carmello appears, you know we’re going to have fun. And that voice. She is a gem.

Lewis– famed for his work as the Phantom of the Opera, starred on Broadway in “Sondheim by Sondheim.” He knows his stuff. But he knows a lot more than that, too. His bass baritone (he says bari-tenor) gives Sweeney a richness to die for (and some do). He’s not joking when he sings about getting revenge. With Lewis, you really get that this is going to end badly.

The star of “Sweeney Todd,” though, is the music. I feel like Dr. Seuss– I could listen to it anywhere! In Harrington’s aka the Barrow it’s stripped down by this amazing trio of musicians almost to the point where you can look at it and study its many intricate parts. Back in March, I sat behind Sondheim and it was like watching the making of the world with God. How did he do this? The big hits– “Johanna,”
“Pretty Women,” “Not While I’m Around”– are equal at least to “Send in the Clowns” or “Somewhere.” But the rest of it moves with the precision of the greatest of operas, and you leave whistling almost the entire show.

This cast says they’re sticking around through mid August so hurry. I hope they stay, but if they don’t, I’ll be back for more hot pies.