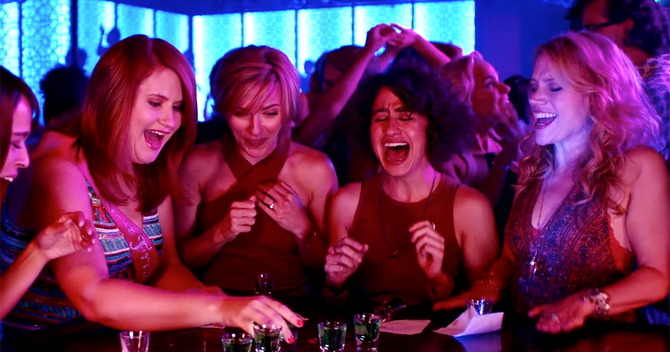 It was a rough night for “Rough Night.” This very, very bad movie was rejected wholesale by the audience. Scarlett Johansson and pals made just $3.35 million, and hope for a $9 mil weekend.  Yes. it’s disaster, but all the people involved deserve it. There is nothing funny or witty about “Rough Night.” It’s just vulgar and stupid. Demi Moore should sue the cinematographer. Ty Burrell is lucky he’s got his detergent commercial.

Even worse news for Colin Trevorrow’s “Book of Henry.” In semi limited release, the dramedy took in $507,765. This is quite a comedown from “Jurassic World.” It also bodes ill for “Star Wars 9.” Will Trevorrow be replaced? It could happen. The star of the week is apparently Matt Reeves, whose “War of the Planet of the Apes” may be the blockbuster breakout of the season.

The big story of the night was “All Eyez on Me.” Very poorly reviewed, the Tupac Shakur biopic still made $12.8 million. No stars, bad reviews, no soundtrack CD. But there was obviously an audience for this following “Straight Outta Compton.” A $30 million weekend is outstanding under these conditions.

The number 1 release of the weekend is “Cars 3.” Disney/Pixar picked up $19.5 million last night. They’re honking horns over at the Maus Haus. Kids are swarming theaters, parents are napping. All is good in Toon Town.