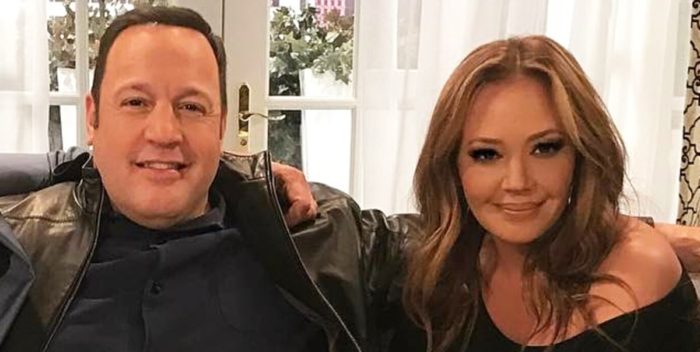 You can’t blame Leah Remini. She and Kevin James have more chemistry than one of those Scientology e-meters. When Remini appeared on the season finale of “Kevin Can Wait,” the more important meters– run by Nielsen– went crazy. Now she’s in as James’s co-star and “Kevin Can Wait” actress Erinn Hayes is out.

Remini and James, of course, had a 9 year hit run in “King of Queens” on CBS. They were like an update of “The Honeymooners” and “Roseanne” and other classic working class comedies. “Kevin Can Wait” was a hit, but not a big sustainable hit. So Remini’s arrival was watched closely. And when it hit big, that was enough for CBS.

Now Erinn Hayes, who played Kevin’s wife Donna, is out after one season. She’ll either disappear, be a dream, be killed off. Who knows? It’s sad for the actress, who probably thought she was going to be in a hit show for seven seasons. But ratings can’t wait.

Remini will return in the fall as her cop character Veronica. All summer she’ll be seen in her Scientology series on A&E, which has turned out to be a hit on its own. Scientology counted on Remini disappearing from TV and prominence. But now she’s really back, and she should only drive them crazy until they’re completely gone.

This is a double triumph for Remini at CBS, too. Remember, she was let go from “The Talk” several seasons ago after “King of Queens.” Now that she’s relocated at CBS, I’d love to see the same for Holly Robinson Peete.

As for Hayes, there is a precedent: Carla Gugino was cut from Michael J. Fox’s “Spin City” years ago. She went on to have a great career in movies, TV, and Broadway. So there’s hope yet.