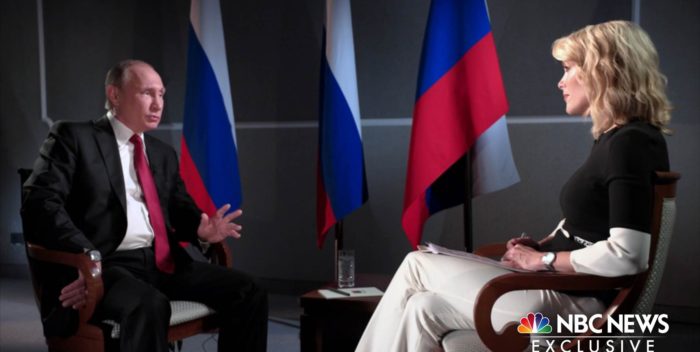 Megyn Kelly’s debut on NBC was a fizzle, no sizzle. Her much touted interview with Russian president Vladimir Putin had no headlines. Basically, Putin said we were all crazy to think he was close to Donald Trump, General Flynn, or Jared Kushner. Kelly nodded in assent. Russia, Putin said, had not interfered in the US election.

Yawn. Megyn Kelly came all the way from Fox to NBC to tell us this. So I guess it’s over. All the intelligence agencies are wrong. Trump and pals are right. You may return to your original program, already in progress. And that program might have been called “Dateline,” since Kelly’s new Sunday show was just “Dateline” with her as the gang leader. Wasn’t this a Brian Williams show called “30 Rock”?

It was nice to see Harry Smith and Cynthia McFadden, two really smart news correspondents whom I think would have asked Putin some follow up questions.

I got so bored I went back to “60 Minutes” and Steve Kroft’s rerun piece (excellent) on Chobani and Lara Logan with gorillas in Rwanda.