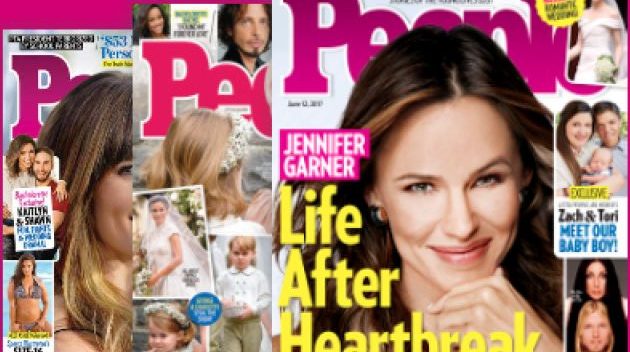 Actress Jennifer Garner has called out People magazine on Facebook. Garner says this week’s People cover story was not authorized by her and she didn’t participate in it. In the magazine business that would be called “a write around” when the star doesn’t participate.

This is the sort of thing that’s typical of tabloids but well outside the world of People, which is owned by Time Inc. People was supposed to be the high standard in celebrity magazines since it began in 1974. The whole idea of People was to get the exclusive interview with whomever they were writing about. It’s hard to imagine the original editors of People– or the editors up til now– approving such a move.

To make matters more obtuse, the Garner story — called “Life After Heartbreak”– isn’t even featured on the People website. The cover itself is being used to promote subscriptions. Something must be up at People. Editor in chief Jess Cagle would never get into such a situation unless he was forced by management. With Time Inc. unable to find a buyer, and the “bottom line” getting tougher than ever to meet, editorial sense seems to have been subjugated to ad dollars. It never,ever works,

It has been brought to my attention that there is a People magazine cover and article out today that appear to be coming from me. It isn’t unusual for me to receive calls from loved ones thinking I forgot to tell them I am pregnant–with twins!–(Geez Louise), but those are so ridiculous they’re easy to ignore.

This isn’t a tragedy by any measure, but it does affect me and my family and so, before my mom’s garden club lights up her phone, I wanted to set the record straight:

I did not pose for this cover. I did not participate in or authorize this article.

While we are here, for what it’s worth: I have three wonderful kids and my family is complete.

Have a beautiful day,