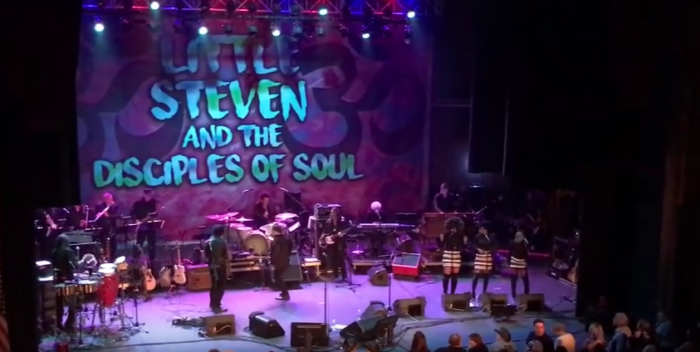 Friday (tomorrow) brings the first album by Little Steven and the Disciples of Soul in a generation. You know Steve van Zandt from the E Street Band. We also know him from his own solo career for furthering the career of Southside Johnny and the Asbury Jukes.

On “Soulfire,” the new album, the Disciples cover a couple of Southside songs written by van Zandt including “I Don’t Want to Go Home” and “Love on the Wrong Side of Town.” The latter was co-written with a guy named Bruce Springsteen. When Little Steven told me was making this new album, I asked if that song would be on it. “No,” he answered and shook his head. His beautiful and smart wife, Maureen, said, “It’s my favorite song. I don’t know why it’s not there.”

I agreed. “Love on the Wrong Side of Town” has long been a favorite of mine. It’s almost a “perfect” rock-pop-soul song. (I often wish Ronnie Spector had recorded it. Steven once recorded her on Billy Joel’s “Say Goodbye to Hollywood” with the E Street Band. It’s on my Desert Island Discs list.) I said, “Steven, I won’t write about the album unless you record that song.” I was kidding, of course.

A few months later, I was told the recording had been done. That I might have had a 5% influence makes me very happy. I love this song. And I love the album. As Southside Johnny sang on another favorite song, “This time it’s for real.”

Take it to the beach, the pool, the picnic. I will have “Soulfire” blaring from my car all summer. What a treat!