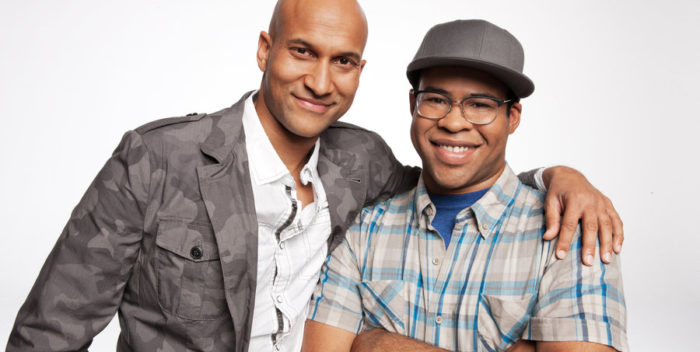 Jordan Peele, a longtime pop culture comedy fixture with his Comedy Central co-star, the mega talented Keegan-Michael Key, is now a Hollywood darling as well, with his sleeper hit horror movie about racism in America,  “Get Out.”  The film cost just $4.5 million to make; it just passed $200 million in worldwide box office.

Getting a head start for the upcoming awards campaign, Peele, producers Jason Blum (his red hot Blumhouse also just had a huge hit with “Split”),  Sean McKittrick along with Jeff Shell, chairman of Universal Filmed Entertainment, recently hosted an event to herald the forthcoming home release of the film on the Universal Studios backlot area, right on “Desperate Housewives” Wisteria Lane.

Transformed to imitate the scary neighborhood of “Get Out,” the street included a gardener looking creepily at guests while at the next home one looked up and saw the movie’s maid eerily looking down.  The garage was converted to be the bedroom of Rose, Allison Williams’s character, along with Fruit Loops, milk, Twinkles and Yodels.  The now famed video of the spoon stirring the cup of tea was playing in the living room across the street aka, the creepy ‘Sunken Place.’  I asked native New Yorker Jordan how it feels to be the ‘it’  guy now.

“I’m so glad Hollywood has responded to this invitation,” he answered.  “I can sort of feel what the movie is doing and there are interesting waves.  I love that it’s resonated with everybody, there is no type, race or gender that has embraced the movie, it’s been an equal thing.  That’s the goal for me as a filmmaker.”

Would he do a sequel?  “ I’m only going to do it if I can make sure it’s better than the original.” What’s up next for him?  “I’m doing a horror film for Universal,” he said. (He just signed a two-year first look production deal with the studio.)

Will his good buddy Keegan join him?  “I’m saying yes, I want him in everything I do, but it all depends if he can.”  Does he think Trump has seen the movie?  Peele quipped, “I bet you he has because he just consumes pop culture as opposed to doing his job.” He then couldn’t resist one more jab. ”Please Trump, stop golfing.”