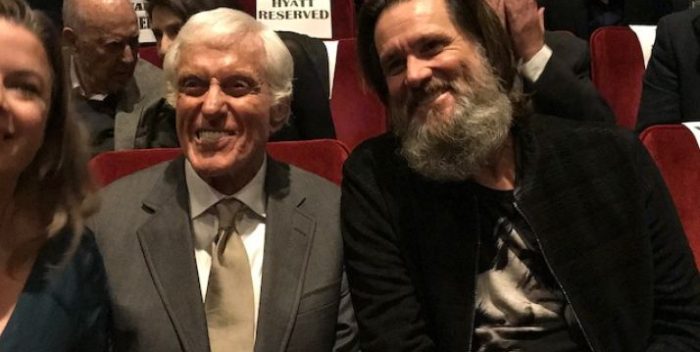 Mel Brooks admittedly loves nothing more than being the perennially class clown in the comedy spotlight.  He showboated at last nights premiere of HBO’s “If You’re Not In The Obit, Eat Breakfast,” which explores what makes living a vibrant life after 90.  The film is the brainchild of producer/manager George Shapiro and Aimee Hyatt, and is cleverly and thoughtfully directed by Danny Gold.

HBO’s lauded Docu Queen Sheila Nevins started the night saying, “I’d like to say we take total credit but we had nothing to do with it. I like this crowd, I’ve never felt so young.”  George Shapiro (who also, along with his late partner Howard West, is Jerry Seinfeld’s longtime manager,) George noted, “The cast was literally sending a love letter to the human race.”

Jim Carrey, unrecognizable in full bushy beard, sat next to Dick Van Dyke. Dick turned him to non-plussed, but as polite and lovely as he is and  said, “sorry, I know I should know you, but I don’t. “ Jim laughed hugged him, said, “I’m Jim Carrey and you’re one of my idols.” Mel, sitting right in  back of them, then started to mercilessly mock Jim’s beard.  Mel cracked Jim up for a good 5 minutes.

As George was leaving the stage, Mel blurted out,  “surprisingly good Georgie.”  When the film was about to start, and the theater was dead quiet, Mel chortled, “Roll em!”   Which of course had the audience laughing.  Of course Mel stood up and bowed.

“DWTS” host Tom Bergeron moderated the post discussion, or what turned out to be “the Mel show,” with Mel quickly declaring, “Tom, you’re superfluous, really.  Everybody here is a self-starter.”  Van Dyke, who noted that he “was the only gentile” on the panel He was quickly corrected by Lear, “ we call it goy.”  Mutual respect lovingly showed as Reiner called Brooks, “the funniest human being in the world,” and Van Dyke “the single most talented man that has ever lived.” Van Dyke described his cohorts as “creative giants.”

Mel told the non-sequitur story of how he imitated the late game show host Bill Cullen’s walk, not knowing Bill had polio. Mel leapt around the stage demonstrating it.  The others  looked owe in awe and smiling resignation.  Mel also made loud note on  how this night was a freebie for him. “They never pay, they never pay.  How funny I was tonight and I don’t get a penny.”

Bergeron asked the men if they ever thought of retiring.  Mel quipped, “I thought of retiring Carl, but he won’t.”  When he asked them what was their secret, Van Dyke replied, “keep moving.”  Reiner said, “keep typing.”  Lear noted, “keep working, “ while Mel’s take was, “eat bran.”  He also asked the panel is there anyone they look up to.  Carl didn’t miss a beat, “anyone that criticizes Trump.  I can’t go to bed without tweeting about him.”

Other  celebs at this once in a lifetime event, Henry Winkler, Barbara Bain, songwriter Alan Bergman, 91 (he sings in the film), the great singer Nancy Wilson, Richard Lewis, Kevin Nealon, Matthew Modine, Paul Reiser, Larry David, best selling author Kathy Freston and longevity expert, Dan Buettner (he’s featured in the film) and more.   “If You’re Not in the Obit, Eat Breakfast,” debuts on HBO June 5th.  Do not miss it. 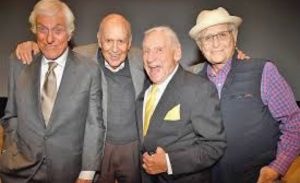 Editors note: This photo of 4 actual legends How extraordinary that these guys are all still with us. Reiner and Brooks became best friends working for Sid Caesar on “Your Show of Shows,” the all time greatest sketch comedy show on TV. They each became creators of great TV shows as well as famed writers and directors on their own. Reiner created and starred in “The Dick Van Dyke Show.” He directed Steve Martin in “The Jerk” and made many more films, and wrote bestselling memoirs. Brooks created “Get Smart” with Buck Henry, then went on to an amazing film career. Norman Lear, also in this photo, is one of the most influential creators in TV history. His “All in the Family” featured Reiner’s son, Rob, who also went on to a great directing career.